Cedar Hills is a census-designated place and neighborhood in Washington County, Oregon, United States south of U.S. Route 26 and west of Oregon Route 217 and within the Portland metropolitan area. Constructed starting in 1946, Cedar Hills was the largest single housing tract development in the western United States at the time of its completion in 1961.

Cedar Hills is located almost entirely in unincorporated Washington County. In the early 2000s, a small portion of the neighborhood was annexed by the city of Beaverton, mainly comprising one school property and an adjacent community center, and in a plan agreed to by the county and Beaverton the remainder is scheduled for annexation in the future.

The formal Cedar Hills neighborhood currently includes 2,114 homes, whose owners are subject to the rules and covenants enforced by the area's homeowners' association, the Homes Association of Cedar Hills. 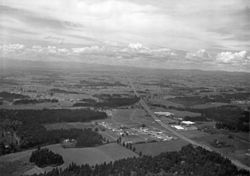 An old photo of the area

Plans to build the large new neighborhood were announced by the project's developers in April 1946, and construction of the first 50 homes had begun by then. Along with roads and utilities, the plans included a shopping center, schools, parks and churches, in a neighborhood of around 2,000 homes on about 800 acres (320 ha). A writer for The Oregonian newspaper at the time called it "the most ambitious suburban housing development ever attempted in the Northwest". 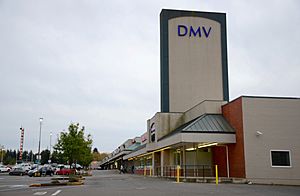 Construction of the planned shopping center began in 1954. Located immediately south of the Sunset Highway, at the northern end of the neighborhood, Cedar Hills Shopping Center opened in April 1955. It originally included a Safeway supermarket (opened in August 1954, months earlier than the remainder of the center), a Rodgers five-and-dime, a Sears catalog store, and several other shops, along with a bank and a gas station. The center's tall neon sign became a local landmark. In 1979, TriMet opened a bus transit center on Wilshire Street, behind the shopping center. Cedar Hills Transit Center remained in operation for almost 20 years, until replaced by the Sunset Transit Center – located immediately across the Sunset Highway (US 26) freeway from Cedar Hills Shopping Center – in 1998, with the opening of the Westside MAX line. The Sunset TC's construction included a long pedestrian bridge over the freeway, to provide access between the TriMet bus and MAX station and the Cedar Hills neighborhood. In 2009, the Oregon Department of Transportation opened a new Driver and Motor Vehicle Services Division (DMV) office in the Cedar Hills Shopping Center, serving as the DMV's Beaverton office, replacing one located on Allen Blvd. in Beaverton proper. 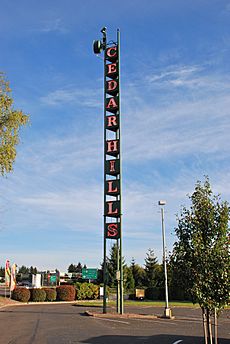 The neon sign tower at the Cedar Hills Shopping Center is a local landmark.

There were 3,749 households, out of which 28.9% had children under the age of 18 living with them, 49.4% were married couples living together, 9.8% had a female householder with no husband present, and 37.0% were non-families. 29.0% of all households were made up of individuals, and 9.0% had someone living alone who was 65 years of age or older. The average household size was 2.39 and the average family size was 2.94.

All content from Kiddle encyclopedia articles (including the article images and facts) can be freely used under Attribution-ShareAlike license, unless stated otherwise. Cite this article:
Cedar Hills, Oregon Facts for Kids. Kiddle Encyclopedia.