One of the major geographical features of the city is Prune Hill. Prune Hill is an extinct volcanic vent and is part of the Boring Lava Field of northwest Oregon and southwest Washington. 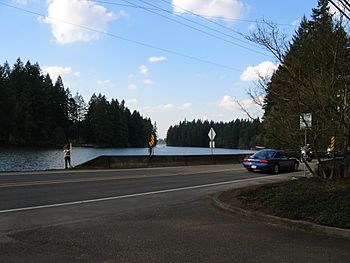 Pictured here is Lacamas Lake. Other lakes and rivers make up over 13% of the Camas area.

Lacamas Park encompasses Round Lake and runs against SR 500 on its west side. Across SR 500 is Lacamas Lake. The park is open year-round from 7 a.m. to dusk and includes barbecues, a play ground, trails around the park and lake, and access to the Camas Potholes.

The park features a network of trails which lead to the Camas Potholes and the Camas lily fields. A 1.2-mile (1.9 km) trail that loops around Round Lake starts and finishes near the parking lot. The park is a popular destination for Geocachers as it contains numerous caches scattered around the park. Young children may play in a small playground on the west side of the park. Tables are provided for picnicking as are waste receptacles designed to receive hot coals from grilling. Bathrooms are available on a seasonal basis only.

Heritage Park has facilities for launching boats into Lacamas Lake, a playground for young children, lots of open field, and small trails through the trees. The parking lot is very large and includes numerous long parking stalls to accommodate vehicles with trailers.

There were 6,619 households, of which 46.5% had children under the age of 18 living with them, 65.7% were married couples living together, 8.9% had a female householder with no husband present, 4.6% had a male householder with no wife present, and 20.8% were non-families. 16.2% of all households were made up of individuals, and 4.9% had someone living alone who was 65 years of age or older. The average household size was 2.91 and the average family size was 3.27.

Camas has the following sister cities, according to [1] and [2]:

All content from Kiddle encyclopedia articles (including the article images and facts) can be freely used under Attribution-ShareAlike license, unless stated otherwise. Cite this article:
Camas, Washington Facts for Kids. Kiddle Encyclopedia.