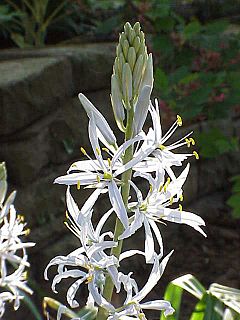 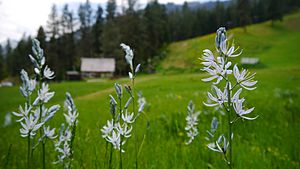 Camassia is a genus of plants in the asparagus family native to western North America. Common names include camas, quamash, Indian hyacinth, camash, and wild hyacinth.

It grows in the wild in great numbers in moist meadows. They are perennial plants with basal linear leaves measuring 8 to 32 inches (20 to 81 cm) in length, which emerge early in the spring. They grow to a height of 12 to 50 inches (30 to 127 cm), with a multi-flowered stem rising above the main plant in summer. The six-petaled flowers vary in color from pale lilac or white to deep purple or blue-violet. Camas can appear to color entire meadows when in flower.

Historically, the genus was placed in the lily family (Liliaceae), when this was very broadly defined to include most lilioid monocots. When the Liliaceae was split, in some treatments Camassia was placed in a family called Hyacinthaceae (now the subfamily Scilloideae). DNA and biochemical studies have led the Angiosperm Phylogeny Group to reassign Camassia to the family Asparagaceae, subfamily Agavoideae.

The name Camassia biflora was coined in 1969 for a South American species now known as Oziroe biflora.

Indigenous peoples of the Pacific Northwest engaged in the active management and cultivation of Blue Camas. Controlled burning was employed to clear land and improve growing conditions for Blue Camas. While Camas plots occurred naturally in the Pacific Northwest, Indigenous peoples would maintain a plot through the planting and harvesting of Camas bulbs, as well as by tilling and weeding. Camas plots were harvested by individuals or kin-groups, who were recognized as a particular plot’s cultivators or stewards. Stewardship was typically lineage-based, and cultivation rights to a particular plot were fiercely guarded. Multiple generations would often harvest the same Camas plot. Plots have been recorded as possessing physical boundary markers, and there were social consequences for harvesting from a plot that was recognized as being maintained by a particular individual or kin-group. The camas bulbs were harvested with a pointed wooden tool, with the work of cultivation being done primarily by women.

Camassia species were an important food staple for Indigenous peoples and settlers in parts of the American Old West. While Camassia species are edible and nutritious, the white-flowered deathcamas species (which are not in the genus Camassia but in a number of genera in the tribe Melanthieae) that grow in the same areas are toxic, and the bulbs are quite similar in appearance. It is easiest to tell the plants apart when they are in flower.

The quamash was a food source for many indigenous peoples in western North America. Blue Camas was harvested when in bloom, in spring or early summer. After being harvested the bulbs were pit-roasted or boiled. A pit-cooked camas bulb looks and tastes something like baked sweet potato, but sweeter, and with more crystalline fibers due to the presence of inulin in the bulbs. The eating of too many such baked bulbs - especially if undercooked - can cause excessive flatulence, due to their containing inulin and other oligosaccharides. When dried, the bulbs could be pounded into flour. Native American peoples who ate camas include the Nez Perce (Nimíipuu), Cree, Coast Salish, Kalapuya, and Blackfoot, and Yakama among many others. The Kutenai called the camas "xapi" (Ktunaxa). Camas bulbs contributed to the survival of members of the Lewis and Clark Expedition.

In the Great Basin, expanded settlement by whites accompanied by turning cattle and hogs onto camas prairies greatly diminished food available to native tribes and increased tension between Native Americans and settlers and travelers. Though the once-immense spreads of camas lands have diminished because of modern developments and agriculture, numerous camas prairies and marshes may still be seen today.

This bulbflower naturalizes well in gardens. The bulb grows best in well-drained soil high in humus. It will grow in lightly shaded forest areas and on rocky outcrops as well as in open meadows or prairies. Additionally it is found growing alongside streams and rivers. The plants may be divided in autumn after the leaves have withered. Bulbs should be planted in the autumn. Additionally the plant spreads by seed rather than by runners.

Role in indigenous trade and culture

In North American Indigenous cultures, trade had economic as well as diplomatic functions, with ceremonies such as the potlatch serving as a means to legitimize an individual’s rule and establish their status as a provider. Camas was frequently traded in large volumes for such occasions.

All content from Kiddle encyclopedia articles (including the article images and facts) can be freely used under Attribution-ShareAlike license, unless stated otherwise. Cite this article:
Camassia Facts for Kids. Kiddle Encyclopedia.