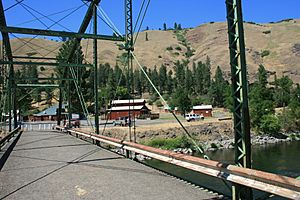 Troy is an unincorporated community in rural Wallowa County, Oregon, United States at the conflux of the Grande Ronde and Wenaha rivers. Troy is west of Flora on Oregon Route 3 close to the Washington state line. It is known for its excellent river fishing, and has an RV park and two fishing lodges, as well as a restaurant.

Troy began to form in the late 1890s, with the establishment in the area of a Mormon settlement called Nauvoo named after the more famous settlement in Illinois.

With the arisal of the "urban drift" in the 1960s, the small town's population dwindled, services which could also be found in nearby Flora closed. The closure of the post office in 1965 reduced the town to a its present status as a fishing vacation site, with a permanent residence estimated at 25-30 people.

All content from Kiddle encyclopedia articles (including the article images and facts) can be freely used under Attribution-ShareAlike license, unless stated otherwise. Cite this article:
Troy, Oregon Facts for Kids. Kiddle Encyclopedia.