For other places with the same name, see Grande Ronde (disambiguation).

The Grande Ronde River ( or, less commonly) is a tributary of the Snake River, 182 miles (293 km) long, in northeastern Oregon and southeastern Washington in the United States. It drains an area southeast of the Blue Mountains and northwest of the Wallowa Mountains, on the Columbia Plateau. It flows through the agricultural Grande Ronde Valley in its middle course and through a series of scenic canyons in its lower course.

Approximately 10 miles (16 km) northwest of Minam it receives the Wallowa River from the southeast, then receives the Wenaha River at Troy just south of the Washington border. It crosses into southeastern Washington, traversing the extreme southeast corner of the state and entering the Snake at Rogersburg Washington, approximately 5 miles (8 km) north of the Oregon border and 15 miles (24 km) downstream from the mouth of the Salmon River. It receives Joseph Creek from the south 2 miles (3.2 km) upstream from its mouth on the Snake.

A diversion channel approximately 5 miles (8 km) long in the Grande Ronde Valley east of La Grande allows the river to bypass a long meandering loop, providing access to its water for irrigation. 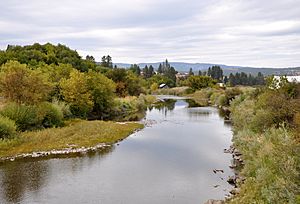 In the early 19th century, the valley of the river was inhabited by Nez Perce, Umatilla, Walla Walla, and Cayuse tribes of Native Americans. Numerous archaeological sites are on the public land around the river.

The Grande Ronde River was given its name sometime before 1821 by French Canadian voyageurs working for the Montreal-based fur trading North West Company. Grande Ronde is a French name meaning "great round".

A portion Grande Ronde and its valley were part of the Oregon Trail. It was first used by settlers in 1844 when Moses "Black" Harris led his party to the river from Fort Hall and then turned northwest to cross the Blue Mountains. Harris' navigation would be subsequently repeated, becoming a regular part of the Oregon Trail. The river was called the "Grand Round River" by at least one English-speaking traveler.

The river today is a popular destination for hunting, especially for game animals such as mule deer, elk, black bear, cougar, and bighorn sheep. Fishing, rafting and hiking are also popular along the designated Wild and Scenic portion of the river. Most of the middle reaches of the river are inaccessible to motor vehicles.

The Grande Ronde River supports populations of spring chinook salmon, summer steelhead, bull trout, mountain whitefish, as well as other species. The river has a sport steelhead fishery and has some tribal fishing for spring chinook.

All content from Kiddle encyclopedia articles (including the article images and facts) can be freely used under Attribution-ShareAlike license, unless stated otherwise. Cite this article:
Grande Ronde River Facts for Kids. Kiddle Encyclopedia.