Elgin is a city in Union County, Oregon, United States. The population was 1,711 at the 2010 census. The community is named after the Lady Elgin, a ship lost on Lake Michigan.

The city is known for the Elgin Opera House, originally dedicated in 1912.

Hunters, trappers, and people of all ethnic groups. Very rarely did they make the treacherous travels from LaGrande. Because it was "120 miles away" by river through the valley. Which back then was covered in thick forest. Elgin was the gathering place for trappers and hunters to replenish their supplies. This is how Elgin became the "Elgin Huskies". Many came across the mountain by sled dog. From the Walla Walla area and the Wallowa's. Mr. Mckinnis was the first to bring his family here he brought cattle from Illinois and settled right on what was the outskirts of Elgin. Built one of the first homes. Even though his home is not set in the history in Elgin there is a letter from his wife's sister to his wife proof of this fact. Mr. McKinnis build the mills from Elgin to Lagrande and also owned all the century farms in the valley passing them down to his kin in death. He also worked in the First Bank in Elgin before they moved to LaGrande. Mr. McKinnis dated building this home here in 1864. Making Elgin's existence somewhat of a mystery. Although we can safely say "The Lady Of The Lake" is older than she seems. 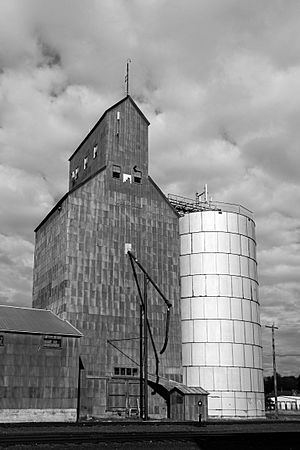 The area of Elgin was previously called "Fish Trap" and "Indian Valley." The city was platted in 1886 following the washout of Ruckles Road over the Blue Mountains, which caused investors to leave nearby Summerville for Elgin.

Growth increased with the arrival of the railroad in 1890, and Elgin was incorporated by the Oregon Legislative Assembly on February 18, 1891.

According to the United States Census Bureau, the city has a total area of 0.99 square miles (2.56 km2), all of it land.

Elgin is at the junction of Oregon Route 82 and Oregon Route 204. Jubilee Lake and its campground are 19 miles (31 km) north of Elgin, in the Umatilla National Forest.

This region experiences warm (but not hot) and dry summers, with no average monthly temperatures above 71.6 °F (22.0 °C). According to the Köppen Climate Classification system, Elgin has a warm-summer Mediterranean climate, abbreviated "Csb" on climate maps.

There were 714 households of which 31.4% had children under the age of 18 living with them, 51.5% were married couples living together, 10.4% had a female householder with no husband present, 5.6% had a male householder with no wife present, and 32.5% were non-families. 27.3% of all households were made up of individuals and 8.9% had someone living alone who was 65 years of age or older. The average household size was 2.40 and the average family size was 2.85.

There were 638 households out of which 31.8% had children under the age of 18 living with them, 55.5% were married couples living together, 11.4% had a female householder with no husband present, and 30.4% were non-families. 23.5% of all households were made up of individuals and 10.7% had someone living alone who was 65 years of age or older. The average household size was 2.58 and the average family size was 3.06.

All content from Kiddle encyclopedia articles (including the article images and facts) can be freely used under Attribution-ShareAlike license, unless stated otherwise. Cite this article:
Elgin, Oregon Facts for Kids. Kiddle Encyclopedia.