La Grande /ləˈɡrænd/ is a city in Union County, Oregon, United States. Originally named "Brownsville", it was forced to change its name because that name was being used for a city in Linn County. Its name comes from an early French settler, Charles Dause, who often used the phrase "La Grande" to describe the area's beauty. The population was 13,082 at the 2010 census. It is the county seat of Union County. La Grande lies east of the Blue Mountains and southeast of Pendleton.

The Grande Ronde Valley had long been a waypoint along the Oregon Trail. The first permanent settler in the La Grande area was Benjamin Brown in 1861. Not long after, the Leasey family and about twenty others settled there. The settlement was originally named after Ben Brown as Brown's Fort, Brown's Town, or Brownsville. There was already a Brownsville in Linn County, so when the post office was established in 1863, a more distinctive name was needed. It was decided to use "La Grande", a phrase used by a Frenchman, Charles Dause, to describe the area's scenic splendor. Before the post office was established, William Currey charged 50 cents a letter to carry the mail on horseback to and from the nearest post office, in Walla Walla, Washington. La Grande was incorporated as a city in 1865, and platted in 1868.

La Grande grew rapidly during the late 1860s and early 1870s, partially because of the region's many gold mines and the valley's agricultural capabilities. The early business establishments centered on C Avenue between present day Fourth Street and the hillside on the west end.

In 1884, the railroad came to the flat slightly east of "Old Town". This helped the town to grow and gave rise to "New Town", centered on Adams Avenue and built parallel to the railroad tracks.

By 1900, La Grande's population was 2992, representing half of the population of Baker City.

La Grande had a factory for processing sugar beets into raw sugar. The sugar beets came from the nearby Mormon town of Nibley, Oregon, and both were owned by the Oregon Sugar Company. R. Doerstling, the superintendent of the factory in 1899, reported seeing a Native American teepee built out of used cloth filters from the factory.

According to the United States Census Bureau, the city has a total area of 4.61 square miles (11.94 km2), of which, 4.58 square miles (11.86 km2) is land and 0.03 square miles (0.08 km2) is water. The town is a major hub in the Grande Ronde Valley. Mount Emily is a Grande Ronde Valley landmark towering over the city of La Grande to the north. It often features prominently on logos of local organizations, and is matched on the other side of the valley by a similar landmark, Mount Harris.

La Grande has a climate that could either be described as a humid continental climate (Köppen Dsb) or a rare cold oceanic or mediterranean climate (Köppen Cfb or Csb), with warm, dry summers and cold winters.

There were 5,395 households of which 28.4% had children under the age of 18 living with them, 40.7% were married couples living together, 11.7% had a female householder with no husband present, 4.6% had a male householder with no wife present, and 43.0% were non-families. 32.8% of all households were made up of individuals and 11.6% had someone living alone who was 65 years of age or older. The average household size was 2.30 and the average family size was 2.93.

There were 5,124 households out of which 28.0% had children under the age of 18 living with them, 45.1% were married couples living together, 9.6% had a female householder with no husband present, and 41.8% were non-families. 32.2% of all households were made up of individuals and 12.6% had someone living alone who was 65 years of age or older. The average household size was 2.32 and the average family size was 2.93. 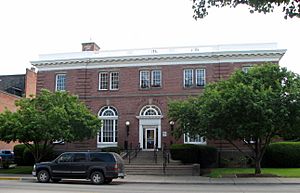 City Hall, located within the historic commercial district and formerly used as a Post Office and federal building.

La Grande includes a historic commercial district listed on the National Register of Historic Places in September 2001. The 42.7-acre (17.3 ha) district is bounded by the following: 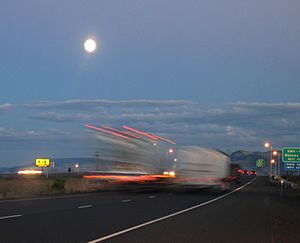 La Grande is a crew change point on the Huntington and La Grande subdivisions of the Union Pacific Railroad, originally constructed through the area in 1884 by the Oregon Railway and Navigation Company. Between 1977 and 1997, the city was a regular stop along the former route of Amtrak's Pioneer between Chicago, Salt Lake City, Portland and Seattle. La Grande is also the junction of the Idaho Northern and Pacific Railroad's 20-mile (32 km) short line to Elgin.

All content from Kiddle encyclopedia articles (including the article images and facts) can be freely used under Attribution-ShareAlike license, unless stated otherwise. Cite this article:
La Grande, Oregon Facts for Kids. Kiddle Encyclopedia.