Baker City is a city in and the county seat of Baker County, Oregon, United States. It was named after Edward D. Baker, the only U.S. Senator ever killed in military combat. The population was 10,099 at the time of the 2020 census. 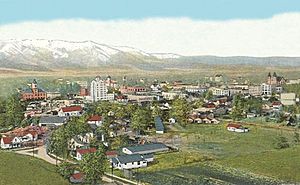 Platted in 1865, Baker City grew slowly in the beginning. A post office was established on March 27, 1866, but Baker City was not incorporated until 1874. Even so, it supplanted Auburn as the county seat in 1868. The city and county were named in honor of U.S. Senator Edward D. Baker, the only sitting senator to be killed in a military engagement. He died in 1861 while leading a charge of 1,700 Union Army soldiers up a ridge at Ball's Bluff, Virginia, during the American Civil War.

The Oregon Short Line Railroad came to Baker City in 1884, prompting growth; by 1900 it was the largest city between Salt Lake City and Portland and a trading center for a broad region. In 1911 the city dropped "City" from its name, but restored it in 1989.

The Roman Catholic Diocese of Baker was established on June 19, 1903, after which the Cathedral of Saint Francis de Sales was built in Baker City. In 1918, Baker was the subject of national interest when the 1918 solar eclipse took place and the U.S. Naval Observatory based its observations there. The path of totality of the upcoming solar eclipse of August 21, 2017 includes Baker City as well.

According to the United States Census Bureau, the city has a total land area of 7.16 square miles (18.54 km2).

The city is situated in a valley between the Wallowa Mountains to the east and the Elkhorn Mountains, part of the Blue Mountains to the west, with the Powder River running through the center of downtown on its way to the Snake River.

Baker City hosts many annual festivals, including the Miners' Jubilee on the third weekend of July, which celebrates the mining history of the area and the filming of the 1969 Lee Marvin and Clint Eastwood musical comedy Paint Your Wagon in the city. The Miners' Jubilee was originally launched in 1934 as the Baker Mining Jubilee, but lapsed after 1941 because of World War II and a declining interest in mining. The event was revived by Richard and Marge Haynes in 1975. The couple organized the celebration for two years before handing it over to the Baker County Chamber of Commerce. 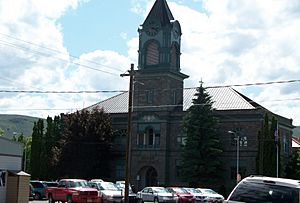 The Baker Historic District, on the National Register of Historic Places, is located on about 42 acres (17 ha) centered on Main Street in downtown Baker City. Within its boundaries are more than 130 properties, about half of which include structures built between the late 1880s and about 1915. Many of these as well as others built as early as 1870 are two-story masonry commercial buildings. The city hall, county courthouse, the former post office, former library, former social clubs, a Roman Catholic cathedral, and an Episcopal Church are among notable buildings within the district.

Baker City Tower, a nine-story structure in the historic district, is the tallest building east of the Cascade Range in Oregon. Opening in 1929 as the Baker Community Hotel, it was converted to other uses after financial setbacks during the Great Depression. The concrete Art Deco structure features terracotta eagles at each ground-floor entrance and is topped by an octagonal observation center with an eight-sided hip roof and a flagpole. 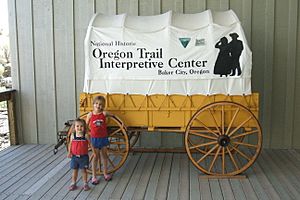 Also in the historic district is the Geiser Grand Hotel, a three-story, stucco-clad, brick structure that at the time of its opening in 1889 had plate glass windows, electric lights, baths, an elevator, and a dining room that seated 200. Originally called the Washauer Hotel, it became the Geiser Grand in about 1895 after its purchase by the John Geiser family, which had large mining investments in Baker County and elsewhere.

Baker Heritage Museum, previously the Oregon Trail Regional Museum, is housed in the Natatorium built in 1920 on Grove street across from the city park. Enjoy exhibits interpreting the rich history of the region including mining, ranching, timber, early Baker City life, Chinese culture, and wildlife. Make sure to stop by the Adler House Museum, the home of Leo Adler is now the Baker Heritage Museum's largest artifact. Learn the amazing story of Leo Adler, Baker City philanthropist who donated millions to the people of Baker County in his will. The Adler house has been restored to his original splendor with original furnishings and interiors.

The National Historic Oregon Trail Interpretive Center, about 5 miles (8.0 km) east of the city, offers exhibits, theater performances, workshops, and other events and activities related to the Oregon Trail, the ruts of which pass through the center's 500-acre (200 ha) site. Established in 1992, the site is managed by the federal Bureau of Land Management and Trail Tenders, a group of volunteers.

Other points of interest in Baker City include the Crossroads Art Center, in a former Carnegie library; the downtown U.S. Bank, featuring a gold display that includes the Armstrong Nugget, weighing 80.4 ounces (2.28 kg); the Eltrym, Baker City's only movie theater, housed in a single-story structure built in the late 1940s.

The Baker City Cycling Classic is a set of bicycle races held in Baker City and the surrounding region. Similar bicycle races, the Elkhorn Classic, were based in Baker City through 2011. The city hosts the Oregon School Activities Association Class 1A girls and boys basketball tournaments at Baker High School in March. The Oregon East−West Shrine Game (high school football) is held here in July. The Hell's Canyon Motorcycle Rally is also held in Baker City, in July.

Sections of the Wallowa–Whitman National Forest are to the west and to the northeast of Baker City, which serves as the forest headquarters. Possible forest activities include hiking, biking, winter sports, fishing, hunting, mineral prospecting, camping, wildlife viewing, and other forms of recreation. 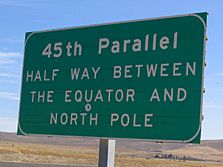 The 45th Parallel sign near Baker City, on Interstate 84

Interstate 84 (I-84) runs along the eastern edge of Baker City, while U.S. Route 30 passes through its downtown. Oregon Route 7 runs between I-84 in Baker City and Sumpter and Austin to the west. Oregon Route 86 heads north and east past the National Historic Oregon Trail Interpretive Center and on to the cities of Richland and Halfway.

Baker City is served by the Union Pacific Railroad (UP), originally the Oregon Railway and Navigation Company (OR&N). In 1887, the UP acquired a long-term lease on the OR&N, which connected to existing UP track and the Oregon Short Line at Huntington. The UP provides freight service but not passenger service to Baker City. Between 1977 and 1997 the city was a regular stop along the former route of Amtrak's Pioneer between Chicago, Salt Lake City, Boise, Portland, and Seattle.

All content from Kiddle encyclopedia articles (including the article images and facts) can be freely used under Attribution-ShareAlike license, unless stated otherwise. Cite this article:
Baker City, Oregon Facts for Kids. Kiddle Encyclopedia.