The Elkhorn Mountains are a mountain range in southwestern Montana, part of the Rocky Mountains and are roughly 300,000 acres (1200 km²) in size. It is an inactive volcanic mountain range with the highest point being Crow Peak at 9,414 ft (2,869 m), right next to Elkhorn Peak, 9,381 ft (2,859 m). The range is surrounded by the cities of Helena, Montana City, Townsend, Whitehall, and Boulder and is part of the Helena National Forest in Montana's Jefferson County. 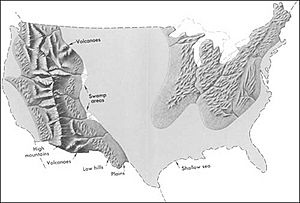 The rocks of the Elkhorns were formed about 74 to 81 million years ago (Late Cretaceous time) as a result of the Farallon tectonic plate subducting beneath western North America and allowing magma to rise to the surface. The Elkhorn Mountains Volcanics are extrusive rocks related to the plutonic granites of the Boulder Batholith. Volcanic flows, lahars, and ash falls from sources in the Elkhorn Mountains reach as far as Choteau, Montana, but the thickest deposits lie within a radius of about 60 miles (97 km) from the Elkhorns. The volcanics probably originally covered an area of about 10,000 square miles (26,000 km2). Mineral deposits associated with the Elkhorn Mountains Volcanics include those mined at Elkhorn, Montana, now a ghost town, and gold at the Golden Sunlight Mine near Whitehall, which is associated with a breccia pipe in the volcanics. 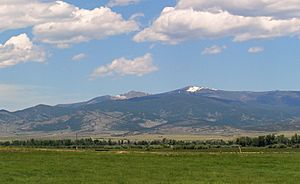 South face of the Elkhorns as seen from outside Boulder, Montana.

A forest fire in 1988 burned 47,000 acres (190 km²) of the mountain range, leaving carpets of seedlings growing into new lodgepole pine forests. The land has been used extensively in the past for gold and silver mining, logging, and open range grazing, leaving a noticeable impact; most notably the abandoned mining town of Elkhorn. Recently with efforts conducted by the BLM, Montana FWP and Helena National Forest, new conservation and wildlife management plans have been put into place including big horn sheep reintroduction and the westslope cutthroat trout restoration program. Management of the 2000+ elk herd in the area and the suppression of noxious weeds is also an ongoing task.

Despite the impacts of mining, around 100,000 acres of the Elkhorns were still roadless in 1992; this included 85,000 acres of roadless National Forest land as well as adjacent BLM, state and private lands. Congress designated 175,000 acres of the range as the "Elkhorns Wildlife Management Area," and one of Montana's most productive elk herds inhabits the range. Because the Elkhorns are higher in elevation than the nearby section of the Continental Divide, they catch more moisture than do most other ranges east of the Divide. For this reason, the Elkhorns are especially diverse, with 148 documented vertebrate species.

All content from Kiddle encyclopedia articles (including the article images and facts) can be freely used under Attribution-ShareAlike license, unless stated otherwise. Cite this article:
Elkhorn Mountains Facts for Kids. Kiddle Encyclopedia.