Boulder is a town in and the county seat of Jefferson County, Montana, United States. It is on the north bank of the Boulder River between Butte and Helena, slightly east of the Continental Divide, at the intersection of Interstate 15 and Montana Highway 69. The population was 1,183 at the 2010 census. It is part of the Helena Micropolitan Statistical Area.

Established in the 19th century as a stagecoach station, Boulder grew into a regional trading center for farmers, ranchers, and miners and, by the end of that century, home to state schools for the deaf, blind and developmentally disabled. In the 21st century, it is the center of government in Jefferson County, and institutions based in the town offer services for disabled or troubled youths. Its library system serves about 10,000 people, and its high school district covers more than 1,000 square miles (2,600 km2). Three buildings in Boulder are listed on the National Register of Historic Places.

Named for the many large boulders in the vicinity, the town of Boulder Valley was established in the early 1860s as a stagecoach station on the route between Fort Benton and Virginia City. It later became a trading center for nearby agricultural areas and the Elkhorn, Comet, and Baltimore mining districts. The Great Northern Railway branch line from Helena to Butte reached Boulder in 1888. State schools for the deaf, blind, and developmentally disabled were established in the city in 1892. In 1897, the town's name was shortened to Boulder. 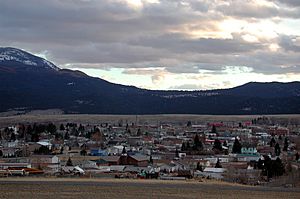 Boulder as seen from near Interstate 15

Boulder lies at an elevation of 4,990 feet (1,521 m) above sea level along Interstate 15 at its intersection with Montana Highway 69, about 35 miles (56 km) north of Butte, and 27 miles (43 km) south of Helena. The town is on the north bank of the Boulder River, a tributary of the Jefferson River. According to the United States Census Bureau, the city has a total area of 1.13 square miles (2.93 km2), all of it land.

In the late Cretaceous Period (roughly 81 to 74 million years ago), molten rock (magma) rose to the Earth's surface in and near what later became Jefferson County and eventually formed an intrusive body of granitic rock up to 10 miles (16 km) thick and 100 miles (161 km) in diameter. This body, known as the Boulder Batholith, extends from Helena to Butte, and is the host rock for the many valuable ores mined in the region. As the granite cooled, it cracked, and hot solutions filled the cracks and formed mineral veins bearing gold and other metals. Millions of years later, weathering allowed gold in the veins to wash down to the gravels in the Boulder River valley. The Boulder mining district was essentially limited to placer mining of those gravels, because the source lodes were in other mining districts in the mountains.

There were 514 households of which 23.2% had children under the age of 18 living with them, 42.8% were married couples living together, 9.1% had a female householder with no husband present, 6.0% had a male householder with no wife present, and 42.0% were non-families. 37.9% of all households were made up of individuals and 11.5% had someone living alone who was 65 years of age or older. The average household size was 2.15 and the average family size was 2.79.

There were 508 households out of which 32.7% had children under the age of 18 living with them, 48.6% were married couples living together, 10.4% had a female householder with no husband present, and 37.6% were non-families. 34.8% of all households were made up of individuals and 12.8% had someone living alone who was 65 years of age or older. The average household size was 2.34 and the average family size was 3.04.

Boulder Community Library is the center of a library system serving about 10,000 people in Jefferson County, Montana. In 2005, it had about 39,000 books and serial volumes in its collection, 85 subscriptions, 3,200 videos, 1,500 audio materials, and 21 Internet terminals.

Boulder's Elkhorn Treatment Center, which operates under the Montana Department of Corrections, is known for its work with women battling methamphetamine addiction.

All content from Kiddle encyclopedia articles (including the article images and facts) can be freely used under Attribution-ShareAlike license, unless stated otherwise. Cite this article:
Boulder, Montana Facts for Kids. Kiddle Encyclopedia.