Summerville is a city in Union County, Oregon, United States. The population was 135 at the 2010 census.

Summerville was platted on September 20, 1873, along Ruckle Road by William H. Patten. Patten had a freight depot along Ruckles Road, only the second road over the Blue Mountains, which was a popular route over the Blue Mountains until it washed out in 1884. Speculators and investors then moved to Elgin, Oregon. An 1888 Sanborn map, the first of four of the city, shows an opera hall, bank, livery, drugstore, as well as other stores. Also in 1888, half of the main street buildings were destroyed by fire, but were shortly rebuilt. As the town was already in a sharp commercial decline by 1910, buildings that were destroyed after then were not replaced. In 1890, the population was 280 people.

According to the United States Census Bureau, the town has a total area of 0.26 square miles (0.67 km2), all of it land.

This region experiences warm (but not hot) and dry summers, with no average monthly temperatures above 71.6 °F (22.0 °C). According to the Köppen Climate Classification system, Summerville has a warm-summer Mediterranean climate, abbreviated "Csb" on climate maps. 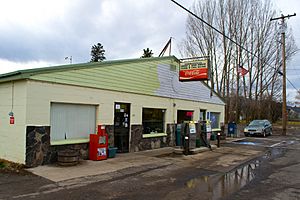 There were 45 households of which 53.3% had children under the age of 18 living with them, 64.4% were married couples living together, 13.3% had a female householder with no husband present, 6.7% had a male householder with no wife present, and 15.6% were non-families. 15.6% of all households were made up of individuals and 8.9% had someone living alone who was 65 years of age or older. The average household size was 3.00 and the average family size was 3.26.

All content from Kiddle encyclopedia articles (including the article images and facts) can be freely used under Attribution-ShareAlike license, unless stated otherwise. Cite this article:
Summerville, Oregon Facts for Kids. Kiddle Encyclopedia.