Kids Encyclopedia Facts
Not to be confused with Nezperce, Idaho.

Nez Perce County (pron. Nezz Purse) is a county located in the U.S. state of Idaho. As of the 2020 census, the population was 42,090. The county seat is Lewiston. The county is named after the Native American Nez Percé tribe. Nez Perce County is part of the Lewiston, Idaho–WA Metropolitan Statistical Area.

Nez Perce County has two rivers, the Clearwater and the Snake, which meet in Lewiston and then flow west. The Clearwater flows from the east and the Snake from the south, creating the state border with Washington (and further upstream, Oregon). The lowest point in the state of Idaho is located on the Snake River in Lewiston in Nez Perce County, where it flows out of Idaho and into Washington. North of Lewiston, Idaho's western border is a political line.

The northern portion of the county is part of the Palouse, a wide and rolling agricultural region of the middle Columbia basin. 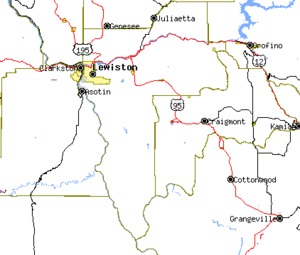 All content from Kiddle encyclopedia articles (including the article images and facts) can be freely used under Attribution-ShareAlike license, unless stated otherwise. Cite this article:
Nez Perce County, Idaho Facts for Kids. Kiddle Encyclopedia.