Kids Encyclopedia Facts
This page is about the county. For the Southern Idaho city, see Shoshone, Idaho.

Shoshone County is a county in the U.S. state of Idaho. As of the 2010 census, the population was 12,765. The county seat is Wallace, and the largest city is Kellogg. The county was established in 1864, named for the Native American Shoshone tribe.

Shoshone County is commonly referred to as the Silver Valley, due to its century-old mining history. The Silver Valley is famous nationwide for the vast amounts of silver, lead, and zinc mined from it. 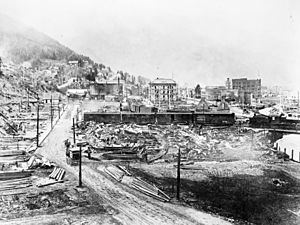 Shoshone County was formed under the Territory of Washington on January 9, 1861. Washington Territory legislators established the county in anticipation of the gold rush that occurred after the discovery of gold at Pierce in October, 1860. Their location of the northern boundary at a line drawn due east from the mouth of the Clearwater River, unknowingly placed the emerging mining settlement at Pierce outside of the county's boundaries while residents of the new Mormon settlement at Franklin were unknowingly within the established boundaries. Regardless of the geographic reality, the county seat was at Pierce. Growth at Pierce was so rapid that Shoshone County boasted the largest vote of any county within Washington Territory at the territorial election of July 8, 1861. In less than a year, Shoshone County contained additional settlements at Lewiston, Elk City, Newsome, and Florence. On December 20, 1861, Nez Perce and Idaho counties were created from most of the original territory of Shoshone County. On the following day, Shoshone's boundaries were shifted northward, containing most of present-day Clearwater County and a portion of present-day Shoshone County.

This new boundary alignment left the existing settlement at Pierce and the new settlement of Orofino as the county's only settlements. The county's population dwindled as prospectors abandoned Pierce for gold prospects at Elk City and Florence. Idaho Territory was created in 1863 and the first census of the territory in that year enumerated only 574 residents in Shoshone County. The county boundaries were expanded to include the Silver Valley by the legislative assembly of Idaho Territory when it officially created Shoshone County on February 4, 1864. The expanded territory contained no population at the second census of Idaho Territory in 1864. All of the county's 276 residents were located at Pierce and Orofino.

Until 1904, Shoshone County included present-day Clearwater County to the south. That portion was annexed by Nez Perce County for several years and then was established as a new county in 1911. When the Silver Valley population rose dramatically in the 1880s, the seat was moved to Murray in 1884 (and to Wallace in 1898) to better serve the majority of the county's population. The southern area's population increased with homesteading in the Weippe area in the late 1890s. The vast distance and time required for travel to Wallace from the Clearwater River area prompted the southern portion to move to Nez Perce County.

Hard rock miners in Shoshone County protested wage cuts with a strike in 1892. After several lost their lives in a shooting war provoked by discovery of a company spy, the U.S. army forced an end to the strike. Hostilities erupted once again in 1899 when, in response to the company firing seventeen men for joining the union, the miners dynamited the Bunker Hill & Sullivan mill. Again, lives were lost, and the U.S. Army intervened, requested by Governor Frank Steunenberg, as the Idaho National Guard troops were still stationed in the Philippines following the Spanish–American War. Steunenberg was assassinated outside his residence in Caldwell in 1905, nearly five years after leaving office, and the subsequent trials in Boise in 1907 made national headlines.

Much of the county was burned in the Great Fire of 1910, including part of the town of Wallace.

All content from Kiddle encyclopedia articles (including the article images and facts) can be freely used under Attribution-ShareAlike license, unless stated otherwise. Cite this article:
Shoshone County, Idaho Facts for Kids. Kiddle Encyclopedia.