Kids Encyclopedia Facts
Not to be confused with Kootenai, Idaho.

Kootenai County ( KOOT-nee) is located in the U.S. state of Idaho. In 2020, the United States Census Bureau estimated the county's population at 171,362, making it the third-most populous county in Idaho and by far the largest in North Idaho, the county accounting for 45.4% of the region's total population. The county seat and largest city is Coeur d'Alene. The county was established in 1864 and named after the Kootenai tribe.

The Coeur d'Alene region takes its name from that given the local natives by French fur trappers. The tribe initially consisted of three bands that inhabited the areas surrounding Coeur d'Alene Lake and the Coeur d'Alene River. Canadian fur trade came to the region starting in 1809, marking the tribe's first contact with Europeans. Christian missionaries would follow with the first Christian meeting officiated by Father Nicolas Pointe on the north bank of Coeur d'Alene Lake at its junction with the Spokane River on December 2, 1842. The St. Joseph mission was initially established northwest of St. Maries in 1844 before being renamed Mission of the Sacred Heart at its relocation to the Cataldo site in 1846. Construction of Idaho's oldest structure commenced with construction of the mission church being completed by 1855. The mission headquarters was moved to DeSmet in 1877.

The Idaho Territorial Legislature created Kootenai County on December 22, 1864. A county government was not immediately organized as a result of lack of significant settlement in the region. Kootenai County contained 81 residents at the 1864 Census of Idaho Territory. Rathdrum was the first of the present incorporated cities to experience settlement starting in 1861. It became a stagecoach stop and later the Kootenai County seat. At the 1870 census, the region was reported under Nez Perce County as the Kootenai District with 31 residents. Post Falls was settled in 1871 while Camp Coeur d'Alene was established in 1878. The camp became a Fort in 1879 and the town of Coeur d'Alene grew up around the fort. Dalton Gardens, Hayden, and Hayden Lake were also settled around this time.

After almost 17 years of existence, Kootenai County finally organized on July 9, 1881. The county's importance grew as a result of completion of the Northern Pacific Railway in 1882 to Rathdrum as well as discovery of gold on the Coeur d'Alene River in neighboring Shoshone County in 1883. Existing settlements grew and new ones were established as a result. Settlement commenced on the railroad at Athol in 1882 and Harrison in 1890.

Continued population growth led to the development of cities. In 1899, Harrison was the county's first city to incorporate. Coeur d'Alene, Spirit Lake, and Athol followed in 1906, 1908, and 1909. Incorporation of Rathdrum Post Falls, and Worley occurred prior to 1920. Clarksville, Hayden Lake, Huetter, State Line, and Eddiville were all incorporated in 1947. Hayden, Dalton Gardens, and Fernan Lake incorporated after 1950. Eddiville and Clarksville were dis-incorporated prior to 1970.

At the time of the Coeur d'Alene Mission's establishment, the territory of Kootenai County was claimed by both the United States and Britain. The government of Oregon Country established four districts on July 5, 1843 and Kootenai's territory was within the boundary of the Clackamas District that later became Clackamas County under Oregon Territory. Washington Territory was established March 2, 1853. Kootenai's territory fell under Walla Walla County starting 1864, followed by Spokane County in 1858. Idaho Territory was established March 3, 1863, resulting in Kootenai County's territory not falling under any county's jurisdiction. On February 2, 1864, it was attached jurisdictionally to Nez Perce County, but remained outside of that county's boundary. The Counties of Kootenai and Lah-Toh were created on December 22, 1864 with Lah-Toh covering Kootenai's present territory. Both counties failed to organize and by 1867, Lah-Toh was abolished and its territory transferred to Kootenai County. Bonner was partitioned off in 1907 and Benewah partitioned in 1915 to give Kootenai its present boundary. In 1905, the legislature attempted to abolish Kootenai County and create the counties of Lewis and Clark in its place. The act was declared unconstitutional by the Idaho Supreme Court. 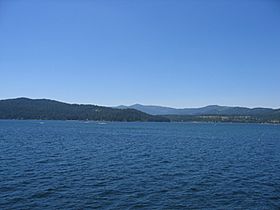 All content from Kiddle encyclopedia articles (including the article images and facts) can be freely used under Attribution-ShareAlike license, unless stated otherwise. Cite this article:
Kootenai County, Idaho Facts for Kids. Kiddle Encyclopedia.