The city of Coeur d'Alene has grown significantly in recent years, in part because of a substantial increase in tourism, encouraged by several resorts in the area. Broadcaster and media figure Barbara Walters called the city "a little slice of Heaven" and included it in her list of most fascinating places to visit. On November 28, 2007, Good Morning America broadcast the city's Christmas lighting ceremony because its display is among the largest in the United States. The Coeur d'Alene Resort takes up a prominent portion of the city's downtown. It is also near two major ski resorts: Silver Mountain Resort to the east in Kellogg, and Schweitzer Mountain Ski Resort to the north in Sandpoint.

The city is named after the Coeur d'Alene People, a federally recognized tribe of Native Americans who lived along the rivers and lakes of the region, in a territory of 3.5 million acres extending into Washington and Montana. They were first encountered by French fur traders in the late 18th and early 19th century, who referred to them as Cœur d'Alène, meaning "heart of an awl," reflecting their experience of the tribal traders as tough businessmen, "sharp-hearted" or "shrewd". 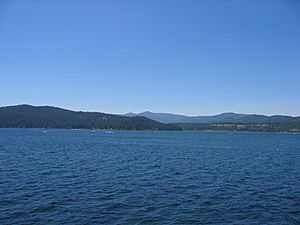 The Coeur d'Alene people called themselves by the autonym Schitsu'umsh in Coeur d'Alene, one of the Salishan languages, meaning "The Discovered People" or "Those Who Are Found Here."

This area was extensively explored by David Thompson of the North West Company starting in 1807. The Oregon boundary dispute (or Oregon question) arose as a result of competing British and American claims to the Pacific Northwest of North America in the first half of the 19th century. The British had trading ties extending from Canada and had started settlements in present-day British Columbia and at Fort Astoria on the Pacific coast near the mouth of the Columbia River. 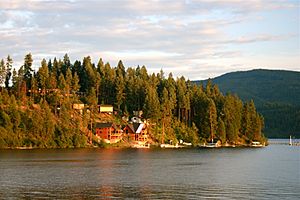 The Oregon Treaty of 1846 ended the disputed joint occupation of the area in present-day Idaho when Britain ceded all rights to land south of the 49th parallel to the United States. When General William T. Sherman ordered a fort constructed on the lake in the 1870s, he gave it the name Fort Coeur d'Alene; hence the name of the city that grew around it. The name of the fort was later changed to Fort Sherman to honor the general. North Idaho College, a community college, now occupies the former fort site. The lake was also named for the Coeur d'Alene.

Miners and settlers came to the region after silver deposits were found. It became the second-largest silver mining district in the country, generating both great wealth and extensive environmental contamination and damages. In the 1890s, two significant miners' uprisings took place in the Coeur d'Alene Mining District, where the workers struggled with high risk and low pay. In 1892, the union's discovery of a labor spy in their midst, in the person of Charlie Siringo, sometime cowboy and Pinkerton agent, resulted in a strike that developed into a shooting war between miners and the company.

Years later Harry Orchard, who owned a share of the Hercules Mine in the nearby mountains before it began producing, confessed to a secret, brutal and little understood role in the Colorado Labor Wars. He later confessed to dynamiting a $250,000 mill belonging to the Bunker Hill Mining Company near Wardner during another miners' uprising in 1899. He returned later to Idaho to assassinate former Idaho Governor Frank Steunenberg in 1905. 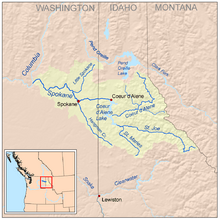 The wooded lands east of the city have been designated for protection and management as the Coeur d'Alene National Forest. The city is surrounded by forest, which contains several lakes and campgrounds.

Coeur d'Alene has, depending on the definition, a dry-summer continental climate (Köppen Dsb), or a warm-summer Mediterranean climate (Csb), characterized by a cold, moist climate in winter, and very warm, dry conditions in summer. It straddles the border between USDA Plant Hardiness Zones 6B and 7A. The monthly daily mean temperature ranges from is 29.8 °F (−1.2 °C) in December to 69.0 °F (20.6 °C) in July and August. Temperatures exceed 90 °F (32 °C) on 13 days per year, only occasionally reaching 100 °F (38 °C), while conversely, there may be several nights below 10 °F (−12 °C). Snowfall averages 70 inches (178 cm) per year; precipitation is generally lowest in summer. The average first and last freeze of the season are October 12 and May 3, respectively.

There were 18,395 households of which 29.9% had children under the age of 18 living with them, 42.2% were married couples living together, 11.6% had a female householder with no husband present, 5.0% had a male householder with no wife present, and 41.2% were non-families. 31.4% of all households were made up of individuals and 12.1% had someone living alone who was 65 years of age or older. The average household size was 2.33 and the average family size was 2.92.

Hispanic or of any race were 2.70% of the population. 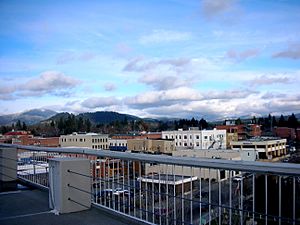 Coeur d'Alene has one sister city:

All content from Kiddle encyclopedia articles (including the article images and facts) can be freely used under Attribution-ShareAlike license, unless stated otherwise. Cite this article:
Coeur d'Alene, Idaho Facts for Kids. Kiddle Encyclopedia.