Silverwood Theme Park is an amusement park located in the city of Athol in northern Idaho, United States, near the town of Coeur d'Alene, approximately 47 mi (76 km) from Spokane, Washington on US 95. Owner Gary Norton opened the park on June 20, 1988. Originally, the park included a small assortment of carnival rides, a "main street" with shops and eateries, and an authentic steam train that traveled in a 30-minute loop around the owner's property. From 1973 to 1988, the land, along with a fully functioning airstrip, was operated as the Henley Aerodrome, named after the family whom Norton bought it from in 1981.

Over the years, Silverwood has grown in both size and popularity, transforming from a small local amusement park to a regional theme park destination. In 2003, an adjacent waterpark named Boulder Beach Water Park was opened. Entrance to Boulder Beach is included with admission to Silverwood. In 2009, Silverwood began an annual Halloween event called Scarywood, held during evenings in the month of October. Comic characters Garfield and Odie are the official mascots of the park.

Today, Silverwood is the largest theme and water park in the American Northwest on 413-acre (1,670,000 m2) and boasting more than 70 rides, slides, shows and attractions. It is the northernmost theme Park in the United States. In 2019, Silverwood co-hosted (along with Rocky Mountain Construction) the Golden Ticket Awards.

In 2009, Silverwood opened Scarywood Haunted Nights, a nighttime fright fest filled with scare zones and mazes. In 2010, Scarywood returned on a larger, grander scale with more to do. The main attractions for Scarywood include: Blood Bayou, an indoor haunted attraction; Planet Zombie, another outdoor haunt ; several scare zones and other walk through as well as the Timber Terror: Backwards. In 2020, due to concerns with Covid-19, Scarywood was cancelled. The park did remain open weekends in October without the scary theming though. 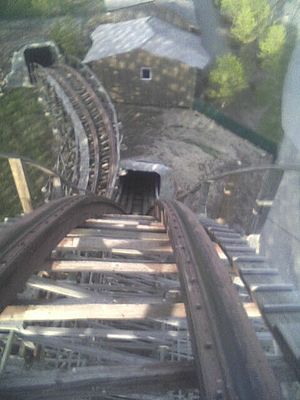 All content from Kiddle encyclopedia articles (including the article images and facts) can be freely used under Attribution-ShareAlike license, unless stated otherwise. Cite this article:
Silverwood Theme Park Facts for Kids. Kiddle Encyclopedia.