The Coeur d'Alene Resort is a luxury resort hotel in the northwest United States, located in Coeur d’Alene, Idaho. Seated on the north shore of Lake Coeur d'Alene by Tubbs Hill, the resort features a marina, convention facilities, spa, as well as a notable 18-hole golf course.

The hotel has 338 guest rooms and suites, and its main tower has 18 floors; the resort also has 40,912 sq ft of meeting room space and 23,000 sq ft of exhibition space for conventions. At 216 feet (66 m), it is the tallest building in northern Idaho and the third-highest in the state.

The "North Shore Resort" opened 56 years ago in 1965 and completed its seven-story tower in 1973; it was acquired by Hagadone Hospitality in June 1983 in a takeover of Western Frontiers, Inc. Duane Hagadone soon announced plans for resort expansion, and the North Shore closed on New Year's Day in 1986 for several months; it reopened in the spring with a new name: "The Coeur d'Alene: A Resort on the Lake." The new 18-story addition, known as the Lake Tower, was built by Hagadone and Jerry Jaeger and opened 35 years ago in May 1986. Designed by architect R.G. Nelson, the hotel features a 0.75-mile (1.2 km) floating boardwalk around the marina.

The golf course is about a mile east (1.6 km) of the resort and was originally the site of the Rutledge sawmill, which operated from 1916 to 1987, closing on October 31. The Hagadone Corporation bought the property from Potlatch Corporation in March 1988 via a three-way land swap, and its buildings were allowed to be burned in June; local fire departments used it as a training exercise.

The golf course and the floating green were developed, and the course opened for play 30 years ago in 1991. Its construction required environmental clean-up of the debris left from the lumber industry, and had stalled in August 1988. With environmental concerns allayed, the project was well received in January and course construction began in 1989. 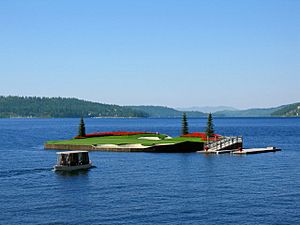 The resort's golf course is best known for its floating green on the 14th hole, and location on the north shore of the lake. The 2,300-ton floating green was installed in September 1990 and unveiled by Hagadone and Governor Cecil Andrus shortly after; the course opened the following spring. "Putter" is the vessel that shuttles players to and from the green.

Phoenix-based designer Scott Miller planned the course to feel like a park, and it has since been ranked among the best resort golf courses in the United States by Golf Digest, Golf Magazine and others. The course was featured in the video game Tiger Woods PGA Tour 2005; its average elevation is approximately 2,200 feet (670 m) above sea level.

All content from Kiddle encyclopedia articles (including the article images and facts) can be freely used under Attribution-ShareAlike license, unless stated otherwise. Cite this article:
Coeur d'Alene Resort Facts for Kids. Kiddle Encyclopedia.