University of Idaho facts for kids 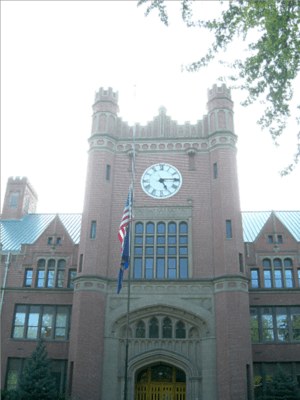 The Administration Building on campus.

The University of Idaho is a public university in Moscow, Idaho. The university has about 11,957 students. It was founded in 1889. The current president of the university is M. Duane Nellis.

The athletics teams of the university are called the Vandals. They have 16 varsity teams, most of which compete in the Big Sky Conference. After playing football as an independent (not in a conference) in 2013, Idaho moved its football team to the Sun Belt Conference in 2014.

All content from Kiddle encyclopedia articles (including the article images and facts) can be freely used under Attribution-ShareAlike license, unless stated otherwise. Cite this article:
University of Idaho Facts for Kids. Kiddle Encyclopedia.