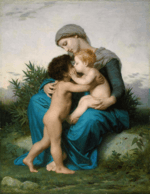 Fraternity is some kind of morality, ethics or idea. A synonym of fraternity is brotherhood.

Fraternity is adopted for the national motto of France, "Liberty, Equality, Fraternity".

Japan's prime minister Ichiro Hatoyama had an idea of a fraternity. The origin of his idea is the book "The totalitarian state against man" (original title in German; "Totaler Staat, totaler Mensch") written by Count Richard Nikolaus Eijiro von Coudenhove-Kalergi, an Austrian politician, geopolitician, and philosopher. Ichiro Hatoyama had made an effort to spread the idea of the fraternity. Ichiro's grandchild Yukio Hatoyama also has become the prime minister of Japan. Yukio Hatoyama has taken over the idea of his grandfather Ichiro's. The family of Hatoyama's fraternity means "Yūai" (友愛code: ja is deprecated ) in Japanese.

All content from Kiddle encyclopedia articles (including the article images and facts) can be freely used under Attribution-ShareAlike license, unless stated otherwise. Cite this article:
Fraternity Facts for Kids. Kiddle Encyclopedia.