Idaho Falls serves as a hub to all of eastern Idaho and much of western Wyoming. Due to its relative economic vitality, high quality of life, and proximity to world-class outdoor recreation, it is often featured in various publications' lists of "best places to live." The area is served by the Idaho Falls Regional Airport and is home to the Idaho Falls Chukars minor league baseball team, and the Idaho Mustangs, a semi-professional football team that plays in the Rocky Mountain Football League.

What became Idaho Falls was the site of Taylor’s Crossing on the Montana Trail which was a timber frame bridge built across the Snake River. The 1865 bridge was built by Matt Taylor who was a Montana Trail freighter who built a toll bridge across a narrow black basaltic gorge of the river that succeeded a ferry seven miles upstream by several years. Taylor’s bridge served the new tide of westward migration and travel in the region that followed the military suppression of Shoshone resistance at the Bear River Massacre near Preston, Idaho in 1863. The bridge improved travel for settlers moving north and west and also for miners, freighters, and others seeking riches in the gold fields of Idaho and Montana and especially the boom towns of Bannack and Virginia City in western Montana. 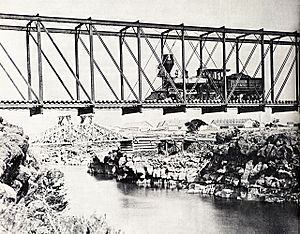 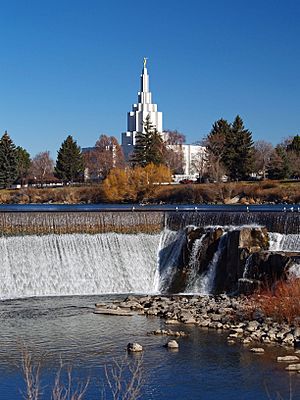 Mail service postmarks indicate that by 1866 the emerging town had become known as Eagle Rock. The name was derived from an isolated basalt island in the Snake River, 7 miles (11 km) upstream at 43°36.112′N 112°3.528′W﻿ / ﻿43.601867°N 112.058800°W﻿ / 43.601867; -112.058800 in the Snake River that was the nesting site for approximately twenty eagles. Previous to Taylor's bridge, in 1864, Harry Rickets built and operated a ferry at this location and so this area of crossing at the Snake River was already known as Eagle Rock to those who did business or that traveled on the Montana Trail. A private bank (the fourth in Idaho), a small hotel, a livery stable, and an eating house also developed at the bridge in 1865 along with the post office and a stage station.

There had been a few cattle and sheep ranchers in the area for years. In 1874 water rights were established on nearby Willow Creek and the first grain harvested. Settlement was sparse and consisted of only a couple of families and small irrigation ditches. The first child of European descent was born at Eagle Rock being delivered in 1874.

The winds of change arrived in the form of the Utah and Northern Railway (U&NR) that came north from Utah through Eagle Rock and crossed the Snake River at the same narrow gorge as the wooden bridge. The U&NR was building its road to the large new copper mines at Butte, Montana and had the backing of robber baron Jay Gould as Union Pacific Railroad had purchased the U&NR a few years prior. Grading crews reached Eagle Rock in late 1878 and by early 1879 a wild camp-town with dozens of tents and shanties moved to Eagle Rock with the typical collection of saloons, dancehalls, and gambling halls. The railroad company had 16 locomotives and 300 train cars working between Logan, Utah at the once quiet stage stop. A new iron railroad bridge was fabricated in Athens, Pennsylvania at a cost of $30,000 and was shipped, by rail, to the site and erected in April and May 1879. The bridge was 800 feet (240 m) long and in two spans with an island in the center. The camp-town moved on but Eagle Rock, the little town at the wooden bridge, now had regular train service and was the site of several of the railroad’s buildings, shops, and facilities which were expanding and completely transforming the town.

As soon as the railroad came through settlers began homesteading the Upper Snake River Valley. The first of the new settlers carved out homesteads to the north at Egin (near present-day Parker) and at Pooles Island (near present-day Menan). Large scale settlement ensued and in a decade there appeared roads, bridges, dams as well as irrigation canals which brought most of the Upper Snake River Valley under cultivation. In 1887, following the construction of the Oregon Short Line, most of the railroad facilities were removed to Pocatello where the new line branched off the U&NR but Eagle Rock was fast becoming the commercial center of an agricultural empire.

In 1891 the town voted to change its name to Idaho Falls, in reference to the rapids that existed below the bridge. Some years later, the construction of a retaining wall for a hydroelectric power plant enhanced the rapids into falls. In 1895 the largest irrigation canal in the world at that time, the Great Feeder, began diverting water from the Snake River and aided in converting tens of thousands of acres of desert into green farmland in the vicinity of Idaho Falls. The area grew sugar beets, potatoes, peas, grains, and alfalfa and became one of the most productive regions of the United States. 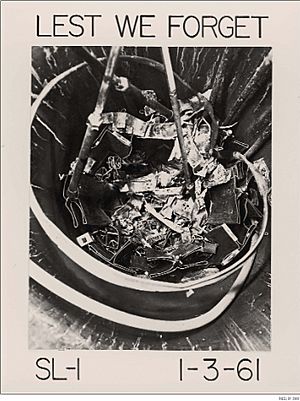 This image of the SL-1 core served as a sober reminder of the death and damage that a nuclear meltdown can cause.

In 1949, the Atomic Energy Commission opened the National Reactor Testing Station in the desert west of the city, and on Dec. 20, 1951, a nuclear reactor produced useful electricity for the first time in history. There have been more than 50 unique nuclear reactors built at the facility for testing. All but three are shut down now.

The site was the scene of the only fatal nuclear reactor incident in U.S. history on the night of January 3, 1961. The event occurred at an experimental U.S. Army reactor plant known as the Argonne Low Power Reactor, which the Army called the Stationary Low-Power Reactor Number One (SL-1) once built. Due to poor design and maintenance procedures, a single control rod was manually pulled out too far from the reactor, causing the reactor to become prompt critical, and leading to a destructive power excursion. Three military, trained men had been working inside the reactor room when a mistake was made while reattaching a control rod to its motor assembly. With the central control rod nearly fully extended, the nuclear reactor rated at 3 MW rapidly increased power to 20 GW; this rapidly boiled the water inside the core. As the steam expanded, a pressure wave of water forcefully struck the top of the reactor vessel upon which 2 of the men stood. The explosion was so severe that the reactor vessel was propelled 9 feet into the air, striking the ceiling before settling back into its original position. One man was killed instantly as he was impaled by a shield plug and lodged into the ceiling. The other men died from their injuries within hours. The three men were buried in lead coffins, and that entire section of the site was buried. The core meltdown caused no damage to the area, although some radioactive fission products were released to the atmosphere. While nuclear reactors like SL-1 were predicted to have lower total costs than conventional systems, the Army program to build and use reactors of this kind was scrapped due to the higher initial procurement costs of nuclear reactors. 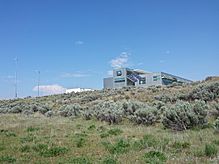 The Idaho National Laboratory (INL), as it is now known, remains a major economic engine for the city of Idaho Falls, employing more than 8,000 people and functioning as an internationally renowned research center. INL operates and manages the world-famous Advanced Test Reactor (ATR). 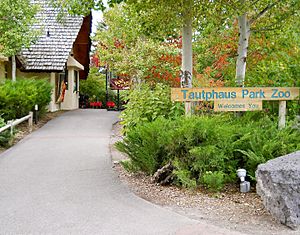 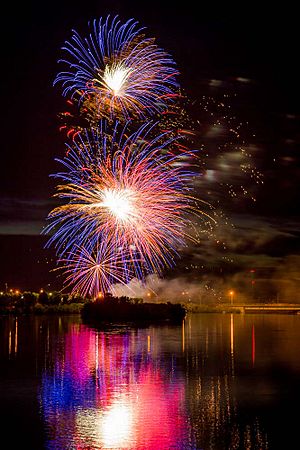 Idaho Falls has established itself as a regional cultural destination. The Willard Art Center, The Colonial Theatre and Civic Auditorium are home to year-round, diverse musical concerts, plays, and events. The greenbelt along the Snake River hosts many community events, such as the Melaleuca Freedom Celebration (on the Fourth of July), the Roaring Youth Jam, and the Farmers' Market.

The Museum of Idaho is a regional attraction which showcases local artifacts and history. It also brings in major traveling exhibits such as dinosaur bones, Gutenberg Bibles, Titanic remnants, and "Bodies: the Exhibition." Idaho Falls is the first city of its size to house the popular attraction.

Downtown Idaho Falls once struggled as the city expanded eastward, but it has been revitalized in recent years due to the efforts of local business owners, the City of Idaho Falls, and other organizations such as the Downtown Development Corporation and the Idaho Falls Chamber of Commerce. Today, it is home to a handful of locally owned shops, stores, restaurants, galleries, theaters, and future revitalization efforts.

The city attracts many tourists visiting nearby Yellowstone and Grand Teton National Parks, Jackson Hole, and the world-class fishing on the Snake River. Due to its proximity to so many outdoor destinations, Idaho Falls was recently named to National Geographic's list of "100 Best Adventure Towns". 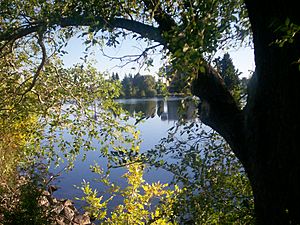 Snake River seen through trees along the greenbelt

Idaho Falls has an extensive greenbelt, or riverbelt, along miles of the Snake River, which flows through the center of the city. It is maintained by the City of Idaho Falls, and often receives donations and grants which allow for occasional expansion. 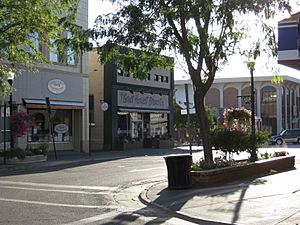 Tornadoes are rare, though a F2 tornado did hit the Idaho Falls area on April 7, 1978 causing between 500,000 and 5 million dollars in damage.

There were 21,203 households of which 37.1% had children under the age of 18 living with them, 52.4% were married couples living together, 11.3% had a female householder with no husband present, 4.7% had a male householder with no wife present, and 31.6% were non-families. 26.5% of all households were made up of individuals and 9.7% had someone living alone who was 65 years of age or older. The average household size was 2.63 and the average family size was 3.20.

There were 18,793 households out of which 37.5% had children under the age of 18 living with them, 56.5% were married couples living together, 10.2% had a female householder with no husband present, and 29.9% were non-families. 25.3% of all households were made up of individuals and 9.1% had someone living alone who was 65 years of age or older. The average household size was 2.65 and the average family size was 3.21.

The top five ethnic groups in Idaho Falls are:

Idaho Falls has a sister city, as designated by Sister Cities International:

All content from Kiddle encyclopedia articles (including the article images and facts) can be freely used under Attribution-ShareAlike license, unless stated otherwise. Cite this article:
Idaho Falls, Idaho Facts for Kids. Kiddle Encyclopedia.