Kids Encyclopedia Facts
This page is about the city in south-central Idaho. For the waterfall in the Snake River Canyon, see Twin Falls (Idaho). For the 1999 motion picture, see Twin Falls Idaho (film).

Twin Falls is the county seat and largest city of Twin Falls County, Idaho, United States. The city had a population of 44,125 as of the 2010 census.

Located on a broad plain, Twin Falls is near the site where Evel Knievel attempted to jump across the Snake River Canyon in 1974 with a rocket-powered motorcycle.

Excavations at Wilson Butte Cave near Twin Falls in 1959 revealed evidence of human activity, including arrowheads, that rank among the oldest dated artifacts in North America. Later Native American tribes predominant in the area included the Northern Shoshone and Bannock.

The first people of European ancestry to visit the Twin Falls area are believed to be members of a group led by American Wilson Price Hunt, which attempted to blaze an all-water trail westward from St. Louis, Missouri, to Astoria, Oregon, in 1811 and 1812. Hunt's expedition met with disaster: much of his expedition was destroyed and one man was killed in rapids on the Snake River known as Caldron Linn near present-day Murtaugh. Hunt and the surviving members of his expedition completed the journey to Astoria by land.

In 1812 and 1813, Robert Stuart successfully led an overland expedition eastward from Astoria to St. Louis, which passed through the Twin Falls area. Stuart's route formed the basis of what became the Oregon Trail. Some 150 years later, Robert Stuart Middle School in Twin Falls was named in his honor. 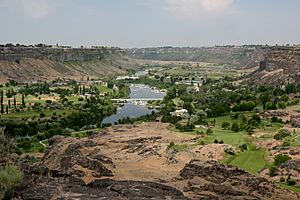 The first permanent settlement in the area was a stage stop established in 1864 at Rock Creek near the present-day townsite. By 1890 there were a handful of successful agricultural operations in the Snake River Canyon, but the lack of infrastructure and the canyon's geography made irrigating the dry surrounding area improbable at best.

To address this issue, in 1900 I. B. Perrine founded the Twin Falls Land and Water Company, largely to build an irrigation canal system for the area. After an August 1900 area survey of 244,025 acres (98,753 hectares), in October 1900 the company was granted the necessary water rights to begin construction of the irrigation system. Several lots in the surveyed area were set aside specifically for future townsites. These lots eventually became the settlements of Twin Falls, Kimberly, Buhl, Filer, Hansen and Murtaugh. In 1902 the project nearly failed as most of the original investors pulled out, with only Salt Lake businessman Stanley Milner maintaining a stake in the company.

By 1903 Perrine, who had been a successful farmer and rancher in the Snake River Canyon, had obtained private financing from Milner and others under the provisions of the Carey Act of 1894 to build a dam on the Snake River near Caldron Linn. Completed in 1905, Milner Dam and its accompanying canals made commercial irrigation outside the Snake River Canyon practical for the first time. As a result, Perrine is generally credited as the founder of Twin Falls.

A land drawing was held for the future townsite in July 1903 with disappointing results. A much more successful drawing was held in October 1904. Twin Falls city was founded in 1904 as a planned community, designed by celebrated Franco-American architect Emmanuel Louis Masqueray, with proceeds from sales of townsite lots going toward construction of irrigation canals. Twin Falls was incorporated as a village on April 12, 1905. The city is named for a nearby waterfall on the Snake River of the same name. In 1907 Twin Falls became the seat of the newly formed Twin Falls County.

After Milner Dam was constructed agricultural production in south-central Idaho increased substantially. In 1909 the privately owned Twin Falls Land and Water Company was reorganized as the shareholder-owned Twin Falls Canal Company. Twin Falls became a major regional economic center serving the agriculture industry, a role which it has sustained to the present day. The city became a processing center for several agricultural commodities, notably beans and sugar beets. In later years other food processing operations augmented the local economy. By 1960, Twin Falls had become one of Idaho's largest cities even though its origins were still within living memory for many.

Twin Falls became the center of national attention in September 1974 when daredevil Evel Knievel attempted to jump the Snake River Canyon in a specially modified rocket cycle. Watched by millions on closed-circuit television on a Sunday afternoon, the attempt ultimately failed due to high winds and a premature deployment of Knievel's parachute. The launch ramp's foundation lies on private land on the canyon's south rim. Less than two miles west (3 km) of Shoshone Falls, it is still visible (42°35′49″N 114°25′23″W﻿ / ﻿42.597°N 114.423°W﻿ / 42.597; -114.423).

During the last quarter of the 20th century, gradual diversification of the agriculture-based economy allowed the city to continue to grow. Major Twin Falls employers in 2006 included computer maker Dell, Inc., Glanbia, and Jayco, a recreational vehicle manufacturer. In September 2009 Dell announced it would close its Twin Falls facility by January 2010. Later in 2010 the call center company C3 opened a facility in the former Dell location. In 2012 Chobani, one of the U.S.'s largest Greek yogurt manufacturers, opened its largest factory and distribution center in Twin Falls.

In recent years Twin Falls has become quite multicultural. Thanks in large part to a refugee center operated by the College of Southern Idaho, since 1995 significant numbers of people from Bosnia and Herzegovina and the former Soviet Union have settled in Twin Falls. The city also has a sizable Hispanic population.

Despite having the distinction of being the largest city in Idaho that is not directly on the Interstate Highway System, Twin Falls is served by several major highways including U.S. Route 30 and U.S. Route 93. Access to Interstate 84 is afforded by a junction with U.S. Route 93 approximately 5 mi (8.0 km) north of the city in Jerome County. Idaho State Highway 74 provides direct access from downtown Twin Falls to southbound locations on U.S. Route 93, including Hollister, Rogerson, and Jackpot, Nevada. 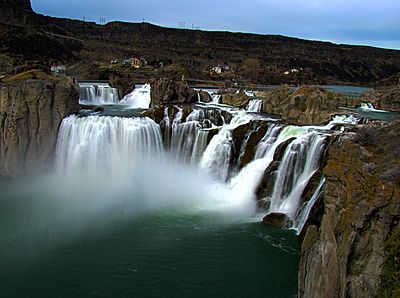 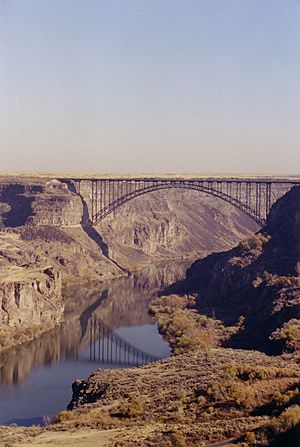 View of the Perrine Bridge from the south side of the canyon.

The Perrine Bridge, which spans the Snake River Canyon immediately north of the city, is one of only a handful of artificial structures worldwide where BASE jumping is legal. In September 2005 Miles Daisher of Twin Falls set a BASE jumping world record by jumping off Perrine Bridge 57 times in a 24-hour period. In July 2006 Dan Schilling jumped off the bridge 201 times in 21 hours to raise money for charity. Unlike Daisher, Schilling was hoisted to the top of the bridge by a crane after every jump.

Monthly temperature averages in Twin Falls range from 34.9 °F (1.6 °C) in January to 85.0 °F (29.4 °C) in July, with lows below freezing from December through March. Highs reach 90 °F (32 °C) on average 18.8 days per year, but very rarely exceed 100 °F (38 °C). Winter snowfall averages 29.5 inches (74.9 cm) per year, though much heavier amounts have fallen. However, in Twin Falls proper after an average snowfall it is uncommon to see more than six inches of snow on streets and sidewalks. Summer and autumn months are very dry in Twin Falls, with less than 1 inch (2.5 cm) inch of precipitation falling each month between June and October. It is not uncommon to experience fast moving, intense electrical storms common in the deserts of the southwestern U.S..

There were 16,744 households of which 35.1% had children under the age of 18 living with them, 48.3% were married couples living together, 12.2% had a female householder with no husband present, 5.2% had a male householder with no wife present, and 34.2% were non-families. 26.6% of all households were made up of individuals and 10.9% had someone living alone who was 65 years of age or older. The average household size was 2.58 and the average family size was 3.13.

On the Livability.com list of "Top Ten Cities to Defy Death", Twin Falls ranked No. 1.

All content from Kiddle encyclopedia articles (including the article images and facts) can be freely used under Attribution-ShareAlike license, unless stated otherwise. Cite this article:
Twin Falls, Idaho Facts for Kids. Kiddle Encyclopedia.