Christina Rene Hendricks (born May 3, 1975) is an American actress. She is best known for her role as Joan Holloway in the AMC drama television series Mad Men, for which she was nominated for six Primetime Emmy Awards.

Hendricks' film credits include Drive, God's Pocket, and Lost River. She currently appears as Celine/"Chair" in the Comedy Central sitcom Another Period, and as Trudy in the SundanceTV drama series Hap and Leonard.

Hendricks is a natural blonde and began coloring her hair red at age 10, inspired by the book Anne of Green Gables. She plays the accordion like her character Joan in Mad Men.

On October 11, 2009, Hendricks married actor Geoffrey Arend. She has said in interviews that she and her husband do not plan to have children. 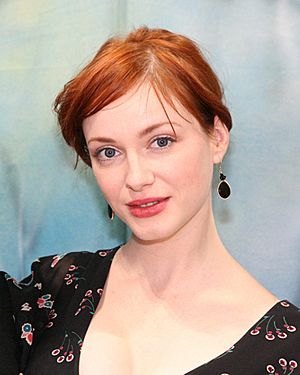 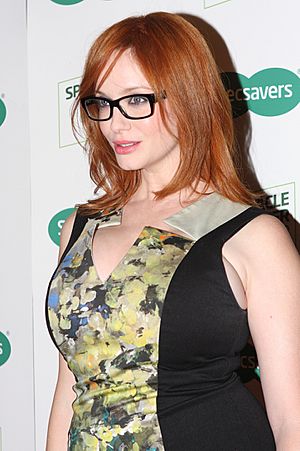 All content from Kiddle encyclopedia articles (including the article images and facts) can be freely used under Attribution-ShareAlike license, unless stated otherwise. Cite this article:
Christina Hendricks Facts for Kids. Kiddle Encyclopedia.