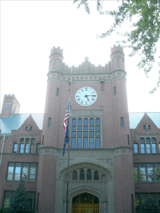 Latah County (pron. LAY-tah) is a county located in the north central region of the U.S. state of Idaho. As of the 2010 census, the population was 37,244. The county seat and largest city is Moscow, the home of the University of Idaho, the state's flagship and land-grant university.

The county was created 133 years ago in 1888 and named for Latah Creek in its northwest corner. The name in the Nez Perce language means "the place of pine trees and pestle." The tribe found shade under the white pine trees for doing their work and stones suitable for use in pulverizing camas roots to process as one of their food staples.

The county comprises the majority of the eastern portion of the Palouse, famous for its rolling hills and rich agriculture. Latah County is the only county in the U.S. established by an act of Congress; it was originally part of Nez Perce County, which was reluctant to lose its most populated area.

Settlement of the Palouse County commenced in 1871. Development of population centers at Genesee and Moscow are the earliest followed by Juliaetta and Kendrick in the 1880s. The railroad's arrival in Moscow in 1885 led to its development as the primary population center of the county. The establishment of the University of Idaho at Moscow in 1889 also was significant in the city's continued growth. Settlement of Troy commenced in 1895 with Bovill being first settled by Lord Hugh Bovill in 1899. Construction of a railroad from Moscow to Bovill was completed in 1907 with the town of Deary developing in that year on the railroad. Potlatch was settled as a company town in 1905.

The Idaho Territorial Legislature established the counties of Lah-Toh and Kootenai on December 22, 1864. Lah-Toh contained all of northern Idaho west of Shoshone County between the Clearwater River and 48° north latitude. Coeur d'Alene was named the county seat of Lah-Toh County. The legislature was well aware that settlement was lacking in the area to support a county government and established that the Governor could organize the county commission upon receipt of a petition from fifty residents. On January 9, 1867, the Fourth Idaho Legislature repealed the act creating the two counties, established the northern line of Nez Perce County to coincide with the present northern line of Latah County, and placed the remaining portion of Lah-Toh within the boundary of Kootenai County. Unaware of Lah-Toh's abolishment, residents of Moscow attempted to organize the county of Lah-Toh in 1878. Initially, the Governor granted the request, but later informed the residents that they were actually located within the boundary of Nez Perce County. The Idaho Territorial Legislature failed to address creation of a county for the residents of Moscow. As a result, Fred T. Dubois successfully petitioned on their behalf for the United States Congress to create the county. On May 14, 1888, Latah County with its county seat at Moscow came into existence as the first and only U.S. county created by the United States Congress. 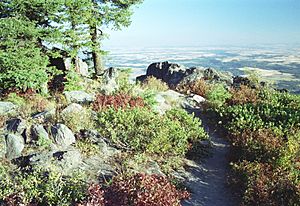 There are numerous species of plants and animals within Latah County. There are a variety of tree species within the county including Western White Pine. Faunal species include the Clay-colored sparrow and Rough-Skinned Newt. 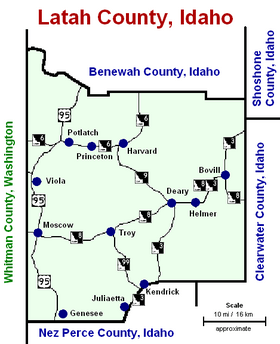 All content from Kiddle encyclopedia articles (including the article images and facts) can be freely used under Attribution-ShareAlike license, unless stated otherwise. Cite this article:
Latah County, Idaho Facts for Kids. Kiddle Encyclopedia.