Clearwater County is a county located in the U.S. state of Idaho. As of the 2010 census, the population was 8,761. The county seat is Orofino. Established in 1911, the county was named after the Clearwater River.

The county is home to North Fork of the Clearwater River, and a small portion of the South Fork and the main Clearwater. Also in the county are the Dworshak Reservoir, Dworshak State Park, Dworshak National Fish Hatchery, and the Dworshak Dam, third highest dam in the U.S. The modest Bald Mountain ski area is located between Orofino and Pierce.

The Clearwater River and Lolo Pass, in the southeast corner of the county, were made famous by the exploration of Lewis and Clark in the early 19th century. Following an arduous trek through the Bitterroot Mountains, suffering through a mid-September snowstorm and near starvation, the Corps of Discovery expedition camped with the Nez Perce tribe on the Weippe Prairie outside of present-day Weippe in 1805. With the assistance of the Nez Perce, the expedition recuperated and constructed burned-out canoes at Canoe Camp in October 1805 and then paddled down the Clearwater, Snake, and Columbia rivers and met the Pacific Ocean a month later at present-day Astoria, Oregon.

Until 1904, Clearwater County was part of Shoshone County to the north. It was annexed by Nez Perce County for several years and then was established as a new county in 1911. The original county seat of Shoshone County was Pierce, in today's Clearwater County. It was the first gold rush area of present-day Idaho (then Washington Territory) in 1860 and was made the county seat of a vast Shoshone County in 1861, two years prior to the establishment of the Idaho Territory. When the Silver Valley population rose dramatically in the 1880s, the seat was moved to Murray in 1884 (and to Wallace in 1898) to better serve the majority of the county's population. The population of the southern area increased with homesteading in the Weippe area in the late 1890s. The vast distance and time required for travel to Wallace from the Clearwater River area prompted the move of the southern portion to Nez Perce County. 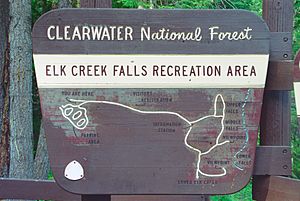 All content from Kiddle encyclopedia articles (including the article images and facts) can be freely used under Attribution-ShareAlike license, unless stated otherwise. Cite this article:
Clearwater County, Idaho Facts for Kids. Kiddle Encyclopedia.