Potlatch is a city in Latah County, Idaho, United States, located about 6 miles (9.7 km) east of the Idaho-Washington state border, in the north central part of the state. It is along State Highway 6, bordered on the northeast by the small community of Onaway. The population was 804 at the 2010 census. 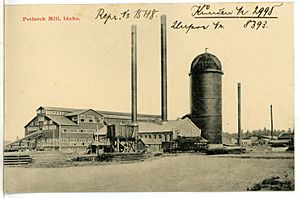 Most of Potlatch was built in 1906 and 1907. A total of 143 houses were built in 1906, with 58 more built the following year; other building constructed during that period include boarding houses, an ice house, a Catholic church, hotel, school, and general store.

The company developed and ran Potlatch on a model mostly patterned after that used by Pullman Company for its company town in Illinois. It provide police and fire protection, a school, churches, a hospital, an inexpensive company store, and recreational amenities. It prohibited alcohol, and encouraged its workers to marry by allowing only married couples to rent the houses it owned. The paternalism was profitable, even though rents were low: during 1943 the company showed a profit of $59,000 for its "townsite" services. Less than a decade later, with labor costs significantly reducing its townsite profit, the mill sold most of the homes and other buildings it owned, and Potlatch was incorporated.

In 1981 the mill was shut down, shortly after the town was sold to the residents. Five years later, part of the town's commercial district, was listed on the National Register of Historic Places.

After the mill's closure, Potlatch became a bedroom community for the university towns of Moscow and Pullman, Washington.

Business and political leaders of Potlatch are making a concerted effort to attract companies involved in the firearms industry; they have set aside 26 acres (11 ha) for such businesses, located on the former site of the mill.

According to the United States Census Bureau, the city has a total area of 0.43 square miles (1.11 km2), all of it land. Potlatch is north of the confluence of Rock Creek and the Palouse River, on the edge of the Palouse ecoregion.

Potlatch has a warm-summer Mediterranean climate (Csb) according to the Köppen climate classification system, although its winter months nearly qualify it as having a dry-summer humid continental climate (Dsb).

There were 339 households of which 35.7% had children under the age of 18 living with them, 49.3% were married couples living together, 10.9% had a female householder with no husband present, 4.1% had a male householder with no wife present, and 35.7% were non-families. 28.9% of all households were made up of individuals and 13.9% had someone living alone who was 65 years of age or older. The average household size was 2.37 and the average family size was 2.92.

There were 332 households out of which 34.3% had children under the age of 18 living with them, 51.5% were married couples living together, 12.0% had a female householder with no husband present, and 33.1% were non-families. 28.6% of all households were made up of individuals and 13.9% had someone living alone who was 65 years of age or older. The average household size was 2.38 and the average family size was 2.96.

All content from Kiddle encyclopedia articles (including the article images and facts) can be freely used under Attribution-ShareAlike license, unless stated otherwise. Cite this article:
Potlatch, Idaho Facts for Kids. Kiddle Encyclopedia.