Spokane International Airport (IATA: GEG, ICAO: KGEG, FAA LID: GEG) is a commercial airport located approximately 5 miles (8 km) west of downtown Spokane, Washington. It is the primary airport serving the Inland Northwest, which consists of 30 counties and includes areas such as Spokane and The Tri-Cities, both in Eastern Washington, and Coeur d'Alene in North Idaho. The airport's code, GEG, is derived from its airfield's namesake, Major Harold Geiger.

As of 2015, Spokane International Airport (GEG) ranks as the 70th-busiest airport in the United States in terms of passenger enplanements. At 3,234,095 total passengers served in 2016, it is also the second busiest airport in Washington and is classified as a small hub. GEG is currently served by five airlines with non-stop service to 13 airports in 12 markets. 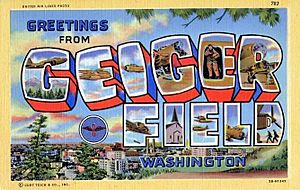 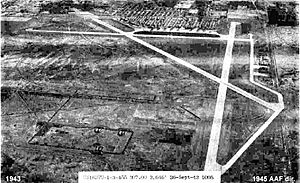 Known as Sunset Field before 1941, it was purchased from the county by the War Department and renamed Geiger Field after Major Harold Geiger, an Army aviation pioneer who died in a crash in 1927.

During World War II, Geiger Field was a major training base by Second Air Force as a group training airfield for B-17 Flying Fortress heavy bombardment units, with new aircraft being obtained from Boeing near Seattle. It was also used by Air Technical Service Command as an aircraft maintenance and supply depot; Deer Park Airport and Felts Field were auxiliaries.

Geiger Field was served by a rail connection to the Great Northern Railway.

Geiger was closed in late 1945 and turned over to War Assets Administration (WAA), then transferred to Spokane County and developed into a commercial airport. The airport hosted USAF Air Defense Command interceptor units during the Cold War for air defense of Hanford Nuclear Reservation and Grand Coulee Dam. Built in 1942 as the Spokane Air Depot, Fairchild Air Force Base is four miles (7 km) to the west.

It became Spokane's municipal airport in 1946, replacing Felts Field, and received its present name in 1960, after the City of Spokane was allotted Spokane Geiger Field by the Surplus Property Act. The airport code is still GEG, for Geiger Field. 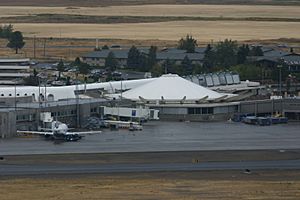 Concourse A and B complex originally opened in 1965

The current Concourse A and B complex opened in 1965 and was designed by Warren C. Heylman and William Trogdon.

Occasional non-stop flights to southern California since the 1970s have been among the first to be suspended during economic downturns.

A second level was added to Concourse A and Concourse B in 1974.

The airport has a Master Plan, which includes a third runway and gates added to Concourse C.

A new control tower has been built south of the airport, replacing the one near Concourse C. The new control tower is the tallest one in the State. The Terminal, Rotunda, and Concourse C Enhancement Project (TRACE) was recently completed, designed by Bernardo/Wills Architects, P.C. The project, which concluded in November 2006, added retail space and expanded security checkpoints in the airport's three concourses, and gave the Rotunda an aesthetic renovation. In 2010, 2000 feet was added to Runway 3–21, and parallel taxiways 'A' and 'G' enabling heavier aircraft departures in summer months.

The airport plans to add another concourse in the next 5–10 years and looks to add more direct flights to the east coast; the Spokane market has been hosting big events and attracting business to the area.

The passenger terminal facility at Spokane International Airport consists of three main structures; Concourse A and B in the center, Concourse C to the southwest, and the Ground Transportation Center to the north. The three structures are immediately adjacent and connected to one another, however the two concourses are not currently linked with an airside connector on the sterile side; as such, connecting passengers need to transit between the concourses through the landside, non-sterile circulation.

Concourse A and B 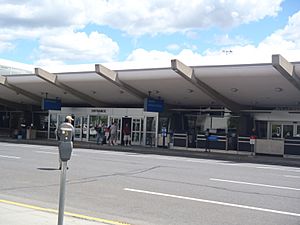 Entrance to the Concourse A and B ticketing area.

View of the Rotunda in Concourse A and B

Concourse A and B are located in the same area and are connected by a central rotunda area with dining and shopping vendors. Concourse A houses 5 gates (11-15), while Concourse B houses 8 gates (1–8). 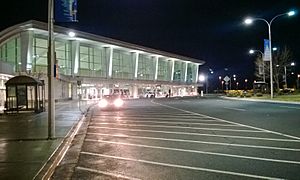 Concourse C houses 9 gates, both upper (30-32) and lower (21a, 21b, 22-26). The lower level gates house regional turboprop jets, while the upper level gates house narrow-body aircraft. The current iteration of Concourse C opened in 2000 after a $20 million redevelopment and expansion project. The project, which broke ground in 1998 added 80,000 square feet to the concourse including a new baggage claim and two-story passenger facility. The existing 11,000 square foot concourse was remodeled into service and operations functions. The new Concourse C was designed with a more contemporary architectural style, contrasting the appearance of the Concourse A and B complex, by employing a large use of metal cladding and large curtain window walls on its exterior building envelope. However, it does draw some inspiration from its neo-expressionist neighbor by architecturally expressing a modular, repetitive, and exposed structural grid through its façade and interior lobby areas.

Spokane International Airport is served by 5 carriers. These carriers serve 12 markets through non-stop service to 13 airports. 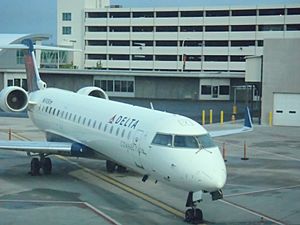 Delta Connection Bombardier CRJ-700 taxis to the Concourse B Gate B6. 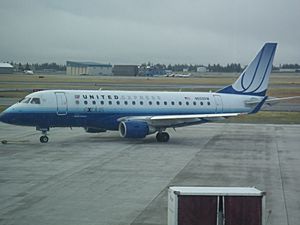 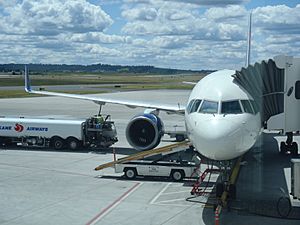 Delta Air Lines Boeing 757 seen at Concourse B Gate B8.

Spokane Transit operates two stops at Spokane International Airport, with bus route 60 connecting the airport to Downtown Spokane. Transfer opportunities are available in downtown to the rest of the STA system. The airport is also served by the WSDOT's Travel Washington Gold Line, which provides twice-daily bus service to cities north of Spokane, including Deer Park, Chewelah, Colville, and Kettle Falls.

A consolidated rental car facility is located adjacent to the Ground Transportation Center on the north end of the main terminal. The consolidated facility opened in November 2008, replacing several satellite operations, and is intended to meet passenger growth at the airport for 20 years after its opening.

All content from Kiddle encyclopedia articles (including the article images and facts) can be freely used under Attribution-ShareAlike license, unless stated otherwise. Cite this article:
Spokane International Airport Facts for Kids. Kiddle Encyclopedia.