Bonner County is a county located in the northern part of the U.S. state of Idaho. As of the 2010 census, the population was 40,877. The county seat and largest city is Sandpoint. Partitioned from Kootenai County and established in 1907, it was named for Edwin L. Bonner, a ferry operator.

Bonner County was formed on February 21, 1907. It was named for travel entrepreneur Edwin L. Bonner, a ferry operator.

In 1864, the Idaho Legislature created the counties of Lah-Toh and Kootenai. Kootenai County initially covered all of present-day Bonner and Boundary counties and a portion of present-day Kootenai County. It also overlapped a portion of the existing boundary of Shoshone County. Sin-na-ac-qua-teen, a trading post located in present-day Bonner County on the south shore of the Pend Oreille River near Laclede, was named county seat. The government of Kootenai failed to organize due to lack of settlement within the county boundary. In 1867, the legislature repealed the act creating the two counties and instead consolidated both into a county retaining the name of Kootenai. Rathdrum became the county seat when Kootenai County finally organized in 1881.

The tiny portion of Bonner County located south of the 48th parallel and east of Shoshone County was not located in any of Idaho's counties from 1863 to 1907, the longest time frame any non-county area existed in the State of Idaho. The Idaho panhandle north of the Clearwater River's basin was in Spokane County, Washington prior to Idaho's creation as a territory in 1863. When Idaho defined its original counties by February, 1864, it attached the former Spokane County area to Nez Perce County for judicial purposes. Legislators creating Kootenai County in December 1864 lacked knowledge of the geography of the area and failed to fully include the non-county area within the county boundaries of Kootenai or Lah-Toh. The non-county area was fully included within Bonner County when it was formed in 1907.

Boundary County was formed from Bonner County in 1915. 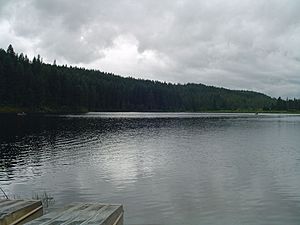 All content from Kiddle encyclopedia articles (including the article images and facts) can be freely used under Attribution-ShareAlike license, unless stated otherwise. Cite this article:
Bonner County, Idaho Facts for Kids. Kiddle Encyclopedia.