Kids Encyclopedia Facts
Not to be confused with Sand Point (disambiguation).

Sandpoint is the largest city in, and the county seat of, Bonner County, Idaho. Its population was 7,365 at the 2010 census.

Sandpoint's major economic contributors include forest products, light manufacturing, tourism, recreation and government services. As the largest service center in the two northern Idaho counties (Bonner and Boundary), as well as northwestern Montana, it has an active retail sector. It was the headquarters of Coldwater Creek, a national women's apparel retailer; it is the headquarters of Litehouse Foods, a national salad dressing manufacturer; and Quest Aircraft, a maker of utility aircraft.

Sandpoint lies on the shores of Idaho's largest lake, 43-mile-long Lake Pend Oreille, and is surrounded by three major mountain ranges, the Selkirk, Cabinet and Bitterroot ranges. It is home to Schweitzer Mountain Resort, Idaho's largest ski resort, and is on the International Selkirk Loop and two National Scenic Byways (Wild Horse Trail and Pend Oreille Scenic Byway). Among other distinctions awarded by national media in the past decade, in 2011 Sandpoint was named the nation's "Most Beautiful Small Town" by Rand McNally and USA Today.

The Salish Tribes, specifically the Kalispel and the Kootenai built encampments on the shore of Lake Pend Oreille every summer, fished, made baskets of cedar, and collected huckleberries before returning to either Montana or Washington in the fall. The encampments ended before 1930.

The region was extensively explored by David Thompson of the North West Company starting in 1807. Disputed joint British/American occupation of the Columbia District led to the Oregon boundary dispute. This controversy ended in 1846 with the signing of the Oregon Treaty, whereby Britain ceded all rights to land south of the 49th parallel.

In the 1880s, the Northern Pacific Railroad brought European and Chinese settlement to the area.

In August 1888, twenty-nine-year-old author and civil servant Theodore Roosevelt visited Sandpoint on a caribou-hunting trip in the Selkirk Mountains. Roosevelt documented what a rough-and-tumble environment "Sand Point" was at that time (and for many decades following).

Sandpoint was officially incorporated in 1898.

Timber harvesting and railroads drove the economy for nearly a century as loggers moved in from the over-harvested Great Lakes region. Several lumber companies operated in the region from as early as 1896 to present, the most notable being the Humbird Lumber Company which operated from 1900 to around 1944. The lumber companies bought land from the Northern Pacific Railroad and built a major mill at Sandpoint and adjacent Kootenai. Lumber company-owned railroads extended into many of the local drainages including Grouse Creek, Gold Creek and Rapid Lightning Creek. Although the trees were never exhausted in the area, Humbird Lumber succumbed to the low timber prices of the Great Depression.

"Stump ranches" were sold by Humbird to many families who slowly cleared much of the valley land of tree stumps. Farming and ranching became the third largest business in the area, behind lumber and railroads, prior to the "discovery" of Lake Pend Oreille as a sports fishery in the 1950s. The economy was given a boost during World War II from Farragut Naval Station, a training center for the US Navy located at the southwestern end of Lake Pend Oreille.

The opening of Schweitzer Mountain Resort in 1963 turned the area into a year-round tourism destination. The beauty of the surrounding Selkirk and Cabinet Mountains and Lake Pend Oreille has kept Sandpoint a tourist favorite for water sports, hunting, hiking, horseback riding, fishing and skiing.

In the 1980s and 1990s, 30 miles south of Sandpoint, the areas of Coeur d'Alene and Hayden Lake attracted nationwide publicity when white supremacist Neo-Nazi groups (most notably the Aryan Nations) set up headquarters in the area. Many Sandpoint residents reacted negatively to such groups; some formed the Bonner County Human Rights Task Force in opposition. In 2001, the Aryan Nations lost a lawsuit filed against them. The lawsuit bankrupted the organization and forced them to give up their Hayden Lake property and disband. In December 2011, Sandpoint became the first city in Idaho to pass an ordinance prohibiting discrimination in housing, employment and public accommodations based on sexual orientation or gender identity. 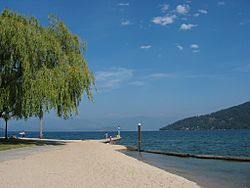 There were 3,215 households of which 29.3% had children under the age of 18 living with them, 39.4% were married couples living together, 12.3% had a female householder with no husband present, 4.7% had a male householder with no wife present, and 43.7% were non-families. 36.3% of all households were made up of individuals and 15.1% had someone living alone who was 65 years of age or older. The average household size was 2.20 and the average family size was 2.86.

All content from Kiddle encyclopedia articles (including the article images and facts) can be freely used under Attribution-ShareAlike license, unless stated otherwise. Cite this article:
Sandpoint, Idaho Facts for Kids. Kiddle Encyclopedia.