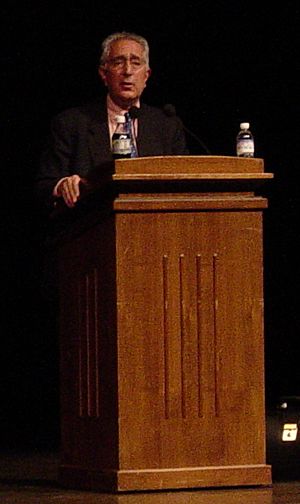 He was a lawyer, then speech writer for Richard Nixon and Gerald Ford. He went into show business helping some liberal writers write accurate portrayals of conservatives for a television show. He soon turned to acting, landing his most famous role as a boring teacher in the movie Ferris Bueller's Day Off. He was also the main person in the 2008 movie Expelled: No Intelligence Allowed. His nerdy appearance and dead-pan manner have made him a popular fixture on movies and TV till this day. From 1997 to 2003 he had his own game show, Win Ben Stein's Money. He also wrote many books and had articles that appeared in popular magazines and newspapers. He is also spokesperson for a product named "Clear Eyes".

All content from Kiddle encyclopedia articles (including the article images and facts) can be freely used under Attribution-ShareAlike license, unless stated otherwise. Cite this article:
Ben Stein Facts for Kids. Kiddle Encyclopedia.