The Selkirk Mountains are a mountain range spanning the northern portion of the Idaho Panhandle, eastern Washington, and southeastern British Columbia which are part of a larger grouping of mountains, the Columbia Mountains. They begin at Mica Peak near Spokane and extend approximately 320 km north (200 miles) from the border to Kinbasket Lake, at the now-inundated location of the onetime fur company post Boat Encampment. The range is bounded on its west, northeast and at its northern extremity by the Columbia River, or the reservoir lakes now filling most of that river's course. From the Columbia's confluence with the Beaver River, they are bounded on their east by the Purcell Trench, which contains the Beaver River, Duncan River, Duncan Lake, Kootenay Lake and the Kootenay River. The Selkirks are distinct from, and geologically older than, the Rocky Mountains. The neighboring Monashee and Purcell Mountains, and sometimes including the Cariboo Mountains to the northwest, are also part of the larger grouping of mountains known as the Columbia Mountains. A scenic highway loop, the International Selkirk Loop, encircles the southern portions of the mountain range.

The Selkirks were named after Thomas Douglas, 5th Earl of Selkirk. 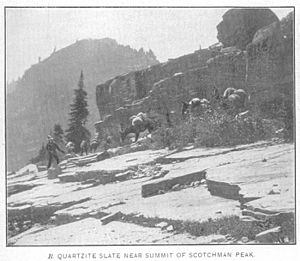 USGS surveyors on Scotchman Peak in 1900

In 1857 gold was discovered in the Selkirks. Coal, copper, marble, mercury, silver, and zinc were also found in the mountains. During the development of Western Canada, the Selkirks presented a formidable barrier to the construction of the Canadian Pacific Railway, until A.B. Rogers discovered the mountain pass that bears his name in 1881–1882. As a result of the railway's construction via that route, Mount Revelstoke and Glacier National Parks (Canada) in the heart of the Selkirks were among the first national parks created in Canada, along with Yoho and Banff National Parks in the Rockies. Until the completion of the Trans-Canada Highway via the Rogers Pass, automotive traffic between most of British Columbia and the rest of Canada necessarily was forced to follow the path of the Columbia River via its Big Bend, around the north end of the Selkirks.

In 2009 the herd of 50 animals was declining, by April 2018, only three remained, and in January 2019, the American Association for the Advancement of Science (AAAS) announced in its scientific journal, Science, that British Columbia's provincial biologists captured the female caribou in Canada and moved her to a captive rearing pen near Revelstoke in the hopes of "preserving highly endangered herds". According to the AAAS, it is believed that this female caribou is the "last member of the last herd to regularly cross into the lower 48 states from Canada".

All content from Kiddle encyclopedia articles (including the article images and facts) can be freely used under Attribution-ShareAlike license, unless stated otherwise. Cite this article:
Selkirk Mountains Facts for Kids. Kiddle Encyclopedia.