The Monashee Mountains are a mountain range lying mostly in British Columbia, Canada, extending into the U.S. state of Washington. They stretch 530 km (329 mi) from north to south and 150 km (93 mi) from east to west. They are a sub-range of the Columbia Mountains. The highest summit is Mount Monashee, which reaches 3,274 m (10,741 ft). The name is from the Scottish Gaelic monadh and sìth, meaning "moor" and "peace". 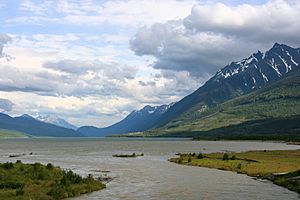 Monashee Mountains, in the distance on the left of Kinbasket Lake.

The Monashee Mountains are limited on the east by the Columbia River and Arrow Lakes, beyond which lie the Selkirk Mountains. They are limited on the west by the upper North Thompson River and the Interior Plateau. The northern end of the range is at the south end of the Robson Valley, near of the town of Valemount, British Columbia. The southern extremity of the range is in Washington State, where the Kettle River Range reaches the confluence of the Kettle River and the Columbia, and reaches west to the southern extremity of the Okanagan Highland (spelled Okanogan Highland in the US) just northeast of the confluence of the Okanogan and Columbia rivers at Brewster and Bridgeport, Washington.

Between Revelstoke and Shuswap Lake, the range is crossed by Highway 1 - the Trans-Canada Highway - and by the mainline of the Canadian Pacific Railway, which run through Eagle Pass. Highway 6 goes over Monashee Pass. The Crowsnest Highway to the south takes the Bonanza Pass. The southern end of the Monashees within Canada is an historically important mining and former industrial area known as the Boundary Country, which is focused around the basin of the lower Kettle River and extends north toward the Midway Range. The Sherman Pass Scenic Byway runs 40 miles (64 km) east from the town of Republic, Washington across the center of the Kettle River Range and reaches its highest point at Sherman Pass, 5,575 feet (1,699 m), the highest mountain pass open all year in Washington state. 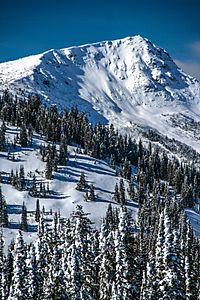 All content from Kiddle encyclopedia articles (including the article images and facts) can be freely used under Attribution-ShareAlike license, unless stated otherwise. Cite this article:
Monashee Mountains Facts for Kids. Kiddle Encyclopedia.