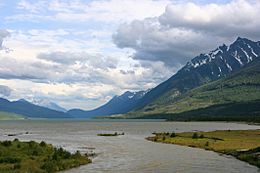 Monashee Mountains, on the right of Kinbasket Lake. The Monashees are a major subrange of Columbia Mountains.

The Columbia Mountains are a group of mountain ranges along the upper Columbia River in British Columbia, Montana, Idaho and Washington. The mountain range covers 135,952 km² (52,491 sq mi). The range is bounded by the Rocky Mountain Trench on the east, and the Kootenay River on the south; their western boundary is the edge of the Interior Plateau. Seventy-five percent of the range is located in Canada and the remaining twenty-five percent in the United States; American geographic classifications place the Columbia Mountains as part of the Rocky Mountains complex, but this designation does not apply in Canada (despite a British Columbia government tourism campaign to rebrand their southern portion as the "Kootenay Rockies"). Mount Sir Sandford is the highest mountain in the range, reaching 3,519 metres (11,545 ft).

The Columbia Mountains are made up of four large ranges containing many subranges:

Additionally lower areas to the west of the main ranges are sometimes included in the description of the Cariboo Mountains:

Some geographic classifications also include the Cabinet Mountains and Salish Mountains, which lie south of the Purcells between the Kootenai River and the Clark Fork of the Columbia, but in US classification systems they are generally considered to be part of the Rocky Mountains.

Physiographically, they are a distinct province of the larger Rocky Mountain System physiographic division.

The following mountains are the 10 highest mountains (in order) contained within the Columbian Mountains: 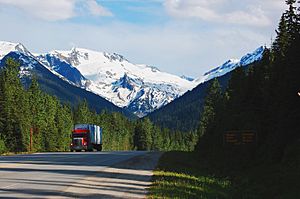 The following passes are located within or on the perimeter of the Columbia Mountains: 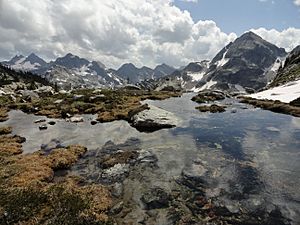 All content from Kiddle encyclopedia articles (including the article images and facts) can be freely used under Attribution-ShareAlike license, unless stated otherwise. Cite this article:
Columbia Mountains Facts for Kids. Kiddle Encyclopedia.