Priest Lake, Idaho, United States is located in the northernmost portion of the Idaho Panhandle, 80 miles northeast of Spokane, Washington, with the northern end of the lake extending to within 15 miles (24 km) of the Canada–US border. The primary lake, lower Priest, is 19 miles long and over 300 feet deep. Upper Priest is connected by a 2.5 mile thoroughfare to lower Priest.

The history of the lake dates back almost 10,000 years to the end of the last ice age. After the vast glaciers that covered most of the area receded and vegetation started to re-grow, humans started to resettle the area. This is evident from historical artifacts found in the area and ancient rock art along the lake.

The first white settlers arrived in the early 19th century. These early settlers were mainly fur trappers who quickly established trade with the native Kalispel Tribe. Jesuit Priests would eventually settle the lake in the 1840s and establish a base camp at Kalispell Bay. One of these priests, Father Pierre-Jean DeSmet, a native Belgian who had escaped from European persecution and became the most trusted of the white men among the Western Native Americans, named the lake Roothaan Lake for one of his superiors in Rome. The name would not stick though and in 1865 Captain John Mullan, a U.S. Army Captain who was traveling through the area under orders to build the "Mullan Trail" from Walla Walla, Washington to Fort Benton, Montana after the discovery of silver in the central Idaho mountains along what today is the route of Interstate 90, would rename the lake Kaniksu. Kaniksu is believed to be the native word for "black robe" and because of the Jesuit presence, the lake was later named Priest Lake.

From the 1890s logging has played an important role at Priest Lake. Logs were floated down the lake, and eventually to the outlet where they would travel down the Priest River until they reached the mills on the Pend Oreille River. National concern over conservation of natural resources led to the Forest Reserve Act of 1891, under which the Priest River Forest Reserve was established in 1897. This forest reserve subsequently evolved into the Kaniksu National Forest – which has been recently incorporated into the Idaho Panhandle National Forests system. Most of the area on the east side of Priest Lake was gradually consolidated into State of Idaho lands beginning after Idaho's admission into statehood in 1890. In 1950 these state lands to the east of Priest Lake were designated as Priest Lake State Forest. Later, in the 1980s, the State executed land exchanges with private companies that added nearly 13,000 acres (53 km²) to the state forest and resulted in its present boundaries. 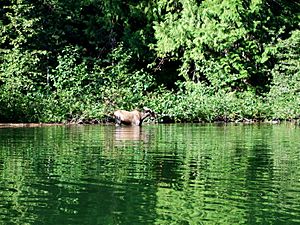 Priest Lake has a pristine variety of wildlife both in and around the lake. The standard bear, deer, and moose population that can be seen throughout northern Washington and Idaho is present about the lake, as well as a small population of grizzly bears. Priest Lake also has a large population of fish, including Cutthroat trout, Kokanee, Lake trout, and Dolly Varden trout. The largest lake trout caught in the United States was caught at Priest Lake, by a Spokane Washington man, Lyle McClure, in 1971 and weighed 57 lbs. 8 oz. The average lake trout ranges weighs in between 4 and 10 pounds.

In 2006, Eurasian milfoil, an aquatic invasive species, was discovered in Priest Lake.

Today the lake's biggest draw is tourism. There are several large private resorts on the lake including Elkins Resort and Hill's Resort. Popular campgrounds include Indian Creek and Lionhead run by the State of Idaho as well as Beaver Creek, Reeder Bay, Osprey, Outlet Bay, and Luby Bay, which are all located in and run by the Idaho Panhandle National Forest. Several hiking trails circle the lake, also connecting to the Upper Priest Lake. In the wintertime, the larger resorts cater to cross-country skiing, snowshoeing, and snowmobiling. There is also a Bed and Breakfast -the historic Old Northern Inn, Coolin Motel, Nordman Resort (Nordman, Idaho), and three marinas, one located at the lake's largest town, Coolin. The Priest Lake Public Library, located at the corner of Luby Bay Road and Highway 57, is open year-round. Housed in the historic Lamb Creek School, the library has wireless internet access and an extensive local history collection. The area is known for its huckleberries which visitors are encouraged to hike in and pick.

Both summer and winter activities at the lake are made possible by a truly four-season climate. Summers are generally warm and sunny with high temperatures around 85 degrees Fahrenheit (29 degrees Celsius). Swimming and boating are very popular in the summer. Winters are cold and snowy, and although not as cold as east of the Rocky Mountains, the area does get much more snow. Sixty inches (1.5 m) precipitation falls in the mountains around the lake each year with almost half of that coming in the form of snow. Cross country skiing and snowmobiling are popular winter activities. 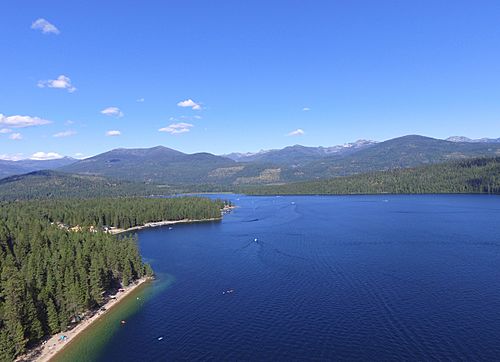 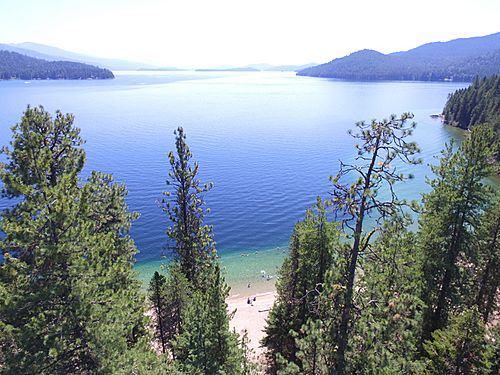 All content from Kiddle encyclopedia articles (including the article images and facts) can be freely used under Attribution-ShareAlike license, unless stated otherwise. Cite this article:
Priest Lake Facts for Kids. Kiddle Encyclopedia.