Pend Oreille County ( pond-Ə-ray) is a county located in the northeast corner of the U.S. state of Washington, along the Canada–US border. As of the 2010 census, the population was 13,001. The county seat and largest city is Newport. The county was created out of Stevens County on March 1, 1911. It is the most recently formed of the state's 39 counties. It is named after the Pend d'Oreilles tribe, who in turn were ostensibly named for large shell earrings that members wore. ("Pend d'oreille", while awkward in French, could be translated as "hangs from the ear".) 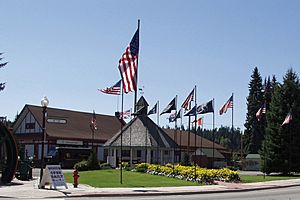 All content from Kiddle encyclopedia articles (including the article images and facts) can be freely used under Attribution-ShareAlike license, unless stated otherwise. Cite this article:
Pend Oreille County, Washington Facts for Kids. Kiddle Encyclopedia.