Elk City is an unincorporated census-designated place in Idaho County, Idaho, United States. As of the 2010 census, its population was 202.

This climatic region is typified by large seasonal temperature differences, with warm to hot (and often humid) summers and cold (sometimes severely cold) winters. According to the Köppen Climate Classification system, Elk City has a humid continental climate, abbreviated "Dfb" on climate maps. 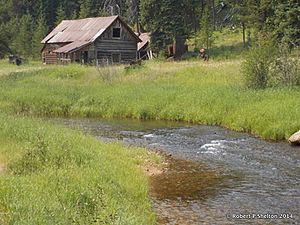 Elk City was the site of a gold strike in 1861, as prospectors rushed south from Pierce, two years before the formation of the Idaho Territory. In the 1870s, Chinese miners leased the claims but were later driven out by mistreatment. Quartz lode operations began in 1902 and dredging in 1935.

All content from Kiddle encyclopedia articles (including the article images and facts) can be freely used under Attribution-ShareAlike license, unless stated otherwise. Cite this article:
Elk City, Idaho Facts for Kids. Kiddle Encyclopedia.