Duckwater Shoshone Tribe of the Duckwater Reservation facts for kids 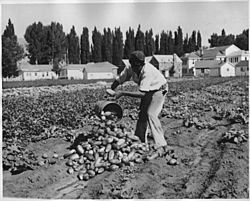 John Billy (Paiute) farming at Duckwater Reservation in the 1930s 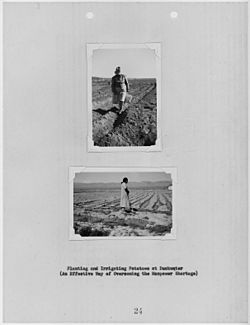 The Duckwater Shoshone Tribe of the Duckwater Reservation is a federally recognized tribe of Western Shoshone, based in central Nevada in the high desert Railroad Valley, in northern Nye County. Their autonym is Tsaidüka in their Shoshoni language, meaning "Eaters of tule."

In October 2016, under the Nevada Native Nations Land Act, they were one of six federally recognized tribes in Nevada to have additional lands put into trust for their reservations. The Duckwater Shoshone Tribe is to receive approximately 31,269 acres (127 km2) of Bureau of Land Management (BLM) land. Gaming is prohibited on the new lands.

In October 2016 the federal government put into trust for the tribe approximately 31,269 acres (127 km2) acres of Bureau of Land Management (BLM) land in Nevada, in order to expand their reservation and give them a more sustainable base. Gaming is prohibited on these new lands. This was done under the Nevada Native Nations Land Act (PL No: 114-232).

Traditionally, this band of Shoshone, a Great Basin tribe, hunted near Railroad Valley in the summer and lived in conical-shaped houses in the mountains in the winter. They hunted ducks, sage grouse, prairie dogs, rabbits, ground squirrels, deer, and other big game. They cultivated chenopodium and Mentzelia.

European-American settlers enter their lands in the late 19th century. The 1863 Treaty of Ruby Valley called for peace between the Western Shoshone and settlers, stipulated that no further white settlement would occur, and did not surrender any Western Shoshone land. Members of the tribe found employment as ranch hands.

The tribe formed a new government under the 1934 Indian Reorganization Act.

The Duckwater Shoshone Tribe is headquartered in Duckwater, Nevada. They are governed by a democratically elected, five-member tribal council. Elections are held annually and members serve staggered terms. Their tribal chairman is Virginia Sanchez, who succeeded Jerry Millet. The tribe has an environmental health office, a health clinic, Police Department, and senior center.

Duckwater-Shoshone Nursery is a tribal venture. The nurseries raise native plants in two greenhouses. These are used in phytoremediation projects by mining operations. The US Fish and Wildlife Service has awarded the tribe three grants to restore Railroad Valley springfish, a threatened species.

Each June, the tribe celebrates its annual Duckwater Festival, with a powwow, barbecue, handgames, and other events. This is a continuation of the traditional summer festivals held by the tribe, when the round dance was danced.

All content from Kiddle encyclopedia articles (including the article images and facts) can be freely used under Attribution-ShareAlike license, unless stated otherwise. Cite this article:
Duckwater Shoshone Tribe of the Duckwater Reservation Facts for Kids. Kiddle Encyclopedia.