Ely ( EE-lee) is the largest city and county seat of White Pine County, Nevada, United States. Ely was founded as a stagecoach station along the Pony Express and Central Overland Route. In 1906 copper was discovered. Ely's mining boom came later than the other towns along US 50. The railroads connecting the transcontinental railroad to the mines in Austin, Nevada and Eureka, Nevada have long been removed, but the railroad to Ely is preserved as a heritage railway by the Nevada Northern Railway and known as the Ghost Train of Old Ely. As of the 2020 census, the population was 3,924. 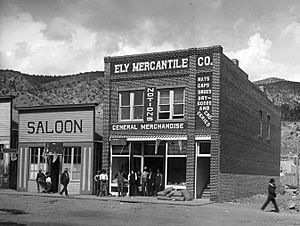 Ely was founded as a stagecoach station along the Pony Express and Central Overland Route. Ely's mining boom came later than the other towns along US 50, with the discovery of copper in 1906. This made Ely a mining town, suffering through the boom-and-bust cycles so common in the West. Originally, Ely was home to a number of copper mining companies, Kennecott being the most famous. With a crash in the copper market in the mid-1970s, Kennecott shut down and copper mining disappeared (temporarily).

The town was first called Ely in 1878 in honor of Smith Ely, president of the Selby Copper Mining and Smelting Company.

With the advent of cyanide heap leaching—a method of extracting gold from what was previously considered very low-grade ore—the next boom was on. Many companies processed the massive piles of "overburden" that had been removed from copper mines, or expanded the existing open-pit mines to extract the gold ore. Gold mines as widespread as the Robinson project near Ruth, and AmSelco's Alligator Ridge mine 65 miles (105 km) from Ely, kept the town alive during the 1980s and 1990s, until the recent revival of copper mining.

As Kennecott's smelter was demolished, copper concentrate from the mine is now shipped by rail to Seattle, where it is transported to Japan for smelting. The dramatic increase in demand for copper in 2005 has once again made Ely a copper boom town.

The now-defunct BHP Nevada Railroad ran from the mining district south of Ruth through Ely to the junction with the Union Pacific at Shafter from 1996–99.

According to the United States Census Bureau, the city has a total area of 7.1 square miles (18 km2), all of it land. 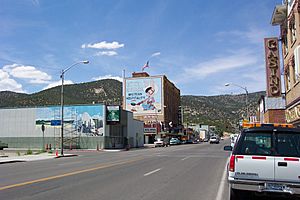 Ely is a tourism center, and is home of the Nevada Northern Railway Museum. The railroad museum features the Ghost Train of Old Ely, a working steam-engine passenger train that travels the historic tracks from Ely to the Robinson mining district.

Ely is the nearest city to the proposed site of the Clock of the Long Now on Mount Washington.

The historic six-story Hotel Nevada and Gambling Hall is in downtown Ely. Opened in 1929, it was the tallest building in Nevada until 1931 and was the state's first fire-proof building. It is a popular lodging, dining, gaming, and tourist stop.

The long stretch of road on State Route 318 near Ely is known for the annual 90 miles (140 km) Silver State Classic Challenge course, an authorized time-trial Cannonball Run-style race that attracts entries from all over the world.

The Ely Renaissance Society is responsible for more than 20 outdoor murals and sculptures in the downtown area. Artists from all over the world have been commissioned to create images of area history, using different art styles. They also maintain a historical village consisting of a general store and several shotgun houses which display the history of the people that came to the area to work for the railroad and the mine.

Ely is also home to regional offices of the U.S. Bureau of Land Management, U.S. Forest Service, and Nevada Department of Wildlife, all of which have information and staff to help visitors enjoy the rich natural resources of the area.

The vast open spaces around Ely are popular with hikers, mountain bikers and cross country skiers.

Ely was the host of the 2016 National Speleological Society's annual convention. The Bureau of Land Management, operates an area supporting an elk herd south of town. The Ely Elk Viewing Area offers visitors the opportunity to see an elk community up close. 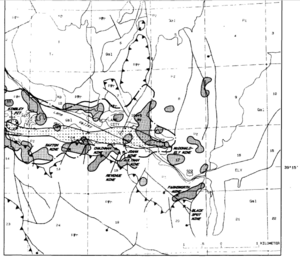 Starting in 1867, iron-rich gossans were mined for precious metals in Lane Valley west of Ely. The Aultman and Saxton Mines were operating by the 1870s. The Chainman Mine was developed by the 1890s and became the most productive in the area. Starting in 1903, copper was mined by the Giroux Consolidated Mining Company and by the Nevada Consolidated Copper Company in 1904. In 1913, Consolidated Copper Mines Company took over Giroux.

In 1936, Fulton and Smith first described magnesite, yet by 1942, when deposits were first studied no magnesite mining existed.

In 1943, Kennecott Copper Corporation took over Nevada Consolidated and by 1958 had consolidated all of the properties in the district.

From 2006 through 2014, the UNLV Rebels football team of the University of Nevada, Las Vegas held training camp in Ely.

Commercial air service was available at Ely Airport until March 31, 2013. In 2011, the Ely Airport was frequently cited as one of the rural airports receiving federal subsidies through the Essential Air Service program.

The historic Lincoln Highway, the first road across America, went through Ely, entering town from the north on U.S. Route 93 and departing town to the west on U.S. Route 50.

All content from Kiddle encyclopedia articles (including the article images and facts) can be freely used under Attribution-ShareAlike license, unless stated otherwise. Cite this article:
Ely, Nevada Facts for Kids. Kiddle Encyclopedia.