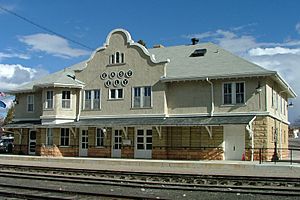 East Ely Depot, built in 1907 for the Nevada Northern Railway.

Museum activities include restoration and operation of historic railroad equipment and various hands on experiences and a variety of special events including seasonal trains for Halloween and Santa-themed trains for Christmas. This is one of the few places in the world where visitors can actually operate a steam locomotive, but this experience requires some advanced planning.

The museum is situated at the East Ely Yards, which are part of the Nevada Northern Railway. The site is listed on the United States National Register of Historic Places as the Nevada Northern Railway East Ely Yards and Shops and is also known as the "Nevada Northern Railway Complex". The rail yards were designated a National Historic Landmark District on September 27, 2006. The site was cited as one of the best-preserved early 20th-century railroad yards in the nation, and a key component in the growth of the region's copper mining industry. Developed in the first decade of the 20th century, it served passengers and freight until 1983, when the Kennecott Copper Company, its then-owner, donated the yard to a local non-profit for preservation. The property came complete with all of the company records of the Nevada Northern from its inception.

The museum collection includes four of the railroad's original steam locomotives, an electric locomotive and several diesel-electric locomotives, as well as a collection of maintenance equipment and numerous historic freight and passenger rail cars. Two of the steam locomotives, #40 and #93, are in operation in regularly scheduled events throughout the year; with #81 currently under restoration to operating condition. Locomotive #40 is the official State Locomotive of Nevada. The museum also maintains an extensive fleet of its original rolling stock, including passenger cars, wood-side box cars, ore cars, and work trains, all dating from the 1910s. It has the oldest operating tank car and the oldest operating coal-fired steam crane on any American railroad.

During the 2002 Winter Olympics, held in Salt Lake City, the Nevada Northern Railway was part of the Olympic Steam Team, carrying spectators to the Soldier Hollow Olympic venue on the Heber Valley Railroad; with locomotive #93 sent to Utah to participate. The day prior to the Opening Ceremony of the games, #93 joined Heber's two steam locomotives in a triple-headed train, and used to transport the Olympic flame from Soldier Hollow to Heber City, Utah as part of the torch relay.

In early November 2020, locomotive #40 was taken out of service for its Federal Railroad Administration (FRA) mandated 1,472-day inspection and overhaul. The museum currently expects to have locomotive #40 back in service again in 2022. The museum also currently expects to have locomotive #81 completed with its restoration to operation and have it running again for the first time by Memorial Day weekend of 2021. By 2022, the museum will have all three of its operating steam locomotives, #40, #93 and #81, in service.

The two story depot is set on a stone foundation. The ground floor is rusticated stone, separated from the upper level by a painted stone belt course, with a stuccoed second story. The gables are curvilinear in the accepted Mission Revival style. The well-preserved interior retains separate men's and women's waiting rooms, with baggage and express rooms. Offices are on the second floor.

The depot was a significant location on the Nevada Northern as the chief embarkation point for the copper mining region of White Pine County. The location of the depot was a matter of controversy between the railroad and residents of Ely, who successfully sued the railroad to change the depot's name from Ely to East Ely to reflect its distance from the main townsite. The railroad, originally owned by the Nevada Consolidated Copper Company, was transferred to the Kennecott Copper Company in 1933 when it took over Consolidated's mining operations. Passenger service on the Nevada Northern stopped in 1941, and the depot was used for Kennecott offices until 1985. The state of Nevada acquired the depot in 1990 for the museum.

The East Ely Depot was listed on the National Register of Historic Places in 1984.

The museum & Ely City own the entire original Nevada Northern Railway route, however only a small segment from Ruth to Ely and from Ely to McGill is currently in use by the railroad for the tourist trains. Another isolated segment connecting to the Union Pacific mainline at Shafter, Nevada is used for car storage.

All content from Kiddle encyclopedia articles (including the article images and facts) can be freely used under Attribution-ShareAlike license, unless stated otherwise. Cite this article:
Nevada Northern Railway Museum Facts for Kids. Kiddle Encyclopedia.