Eureka is an unincorporated town and census-designated places in and the county seat of Eureka County, Nevada, United States. With a population of 480 as of the 2018 American Community Survey 5-Year Estimates, it is by far the largest community in Eureka County. Attractions include the Eureka Opera House (built in 1880 and restored in 1993), Raine’s Market and Wildlife Museum (built 1887), the Jackson House Hotel (built 1877), and the Eureka Sentinel Museum (housed in the 1879 Eureka Sentinel Newspaper Building).

Eureka is part of the Elko Micropolitan Statistical Area. 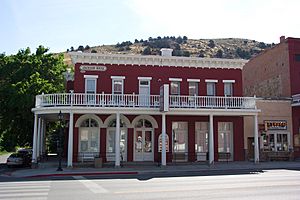 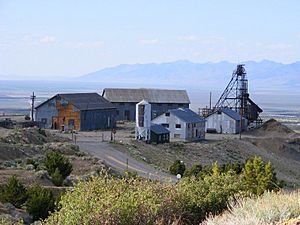 The historic Richmond Mine, one of the two major lead-silver mines in Eureka

The town was first settled in 1864 by a group of silver prospectors from nearby Austin, who discovered rock containing a silver-lead ore on nearby Prospect Peak. The town became the county seat in 1873, when Eureka County was carved out of adjacent Lander, Elko, and White Pine counties.

Mining, especially for lead, was the town's economic mainstay, as the nearby hillsides ranked as Nevada's second-richest mineral producer, behind western Nevada's Comstock Lode. Two of the largest concerns in Eureka were the Richmond Mining Company and the Eureka Mining Company. These two companies often collided, and in one instance, their litigation reached the U.S Supreme Court. The population boomed, reaching a high of 10,000 by 1878, but shrank as decreasing mine production and changing market conditions led to the closing of mines.

Eureka has a public library, a branch of the Elko-Lander-Eureka County Library System.

All content from Kiddle encyclopedia articles (including the article images and facts) can be freely used under Attribution-ShareAlike license, unless stated otherwise. Cite this article:
Eureka, Nevada Facts for Kids. Kiddle Encyclopedia.