Spring Creek is a census-designated place (CDP) in central Elko County, in northeastern Nevada in the western United States. It mainly serves as a bedroom community for the businesses and industries in and around the nearby city of Elko. It is part of the Elko Micropolitan Statistical Area. The population was 12,361 at the 2010 census.

Spring Creek is located in a large valley between the Elko Hills to the northwest, and the Ruby Mountains to the southeast. To the southwest is Huntington Valley and the South Fork of the Humboldt River, while to the north is the main branch of the Humboldt. The city of Elko is approximately 6 miles (9.7 km) to the northwest, while Lamoille is just to the east. According to the United States Census Bureau, the CDP has a total area of 58.7 square miles (152 km2). 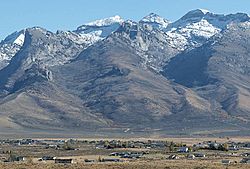 Spring Creek lies at the base of the Ruby Mountains 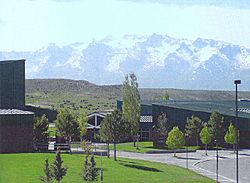 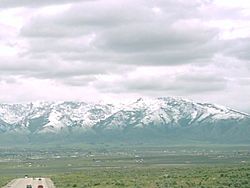 The community was developed in the 1970s by C. V. Wood, president of McCulloch Oil, as three large housing sections. The western section, at the base of the Elko Hills, is located near the post office (zip 89815), a shopping center, and a supermarket. About 1 mile to the east is the main school campus for grades 1-12. The central section of the community, another mile to the east, includes a park and lake ("The Marina"), and an 18-hole golf course and clubhouse. Nearby are an outdoor sports complex and a second elementary school. The southern section of the community surrounds an indoor sports arena ("The Horse Palace"), and is adjacent to the Ruby Mountains and a community-owned campground. 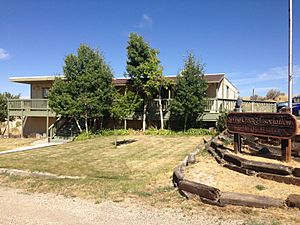 There were 4,204 households, out of which 44.1% had children under the age of 18 living with them, 75.2% were married couples living together, 4.7% had a female householder with no husband present, and 15.0% were non-families. 11.0% of all households were made up of individuals, and 1.6% had someone living alone who was 65 years of age or older. The average household size was 3.10 and the average family size was 3.35.

SR 227, more commonly known as Lamoille Highway, is the primary highway through Spring Creek, connecting it to Lamoille and Elko. SR 228, also known as Jiggs Highway, begins at SR 227 in Spring Creek and continues south to Jiggs; the road eventually reaches Ruby Valley after losing its state highway designation. Passenger rail service is available from the nearby Elko Train Station, while commercial air service can be found at the Elko Regional Airport.

All content from Kiddle encyclopedia articles (including the article images and facts) can be freely used under Attribution-ShareAlike license, unless stated otherwise. Cite this article:
Spring Creek, Nevada Facts for Kids. Kiddle Encyclopedia.