Lovelock is the county seat of Pershing County, Nevada, United States, in which it is the only incorporated city. It is the namesake of a nearby medium-security men's prison and a Cold War-era gunnery range. Formerly a stop for settlers on their way to California and later a train depot, the town's economy remains based on farming, mining and increasingly on tourism.

Lovelock lies in the Humboldt River Basin, very near the terminus of the river. Some twenty miles outside the town is the Lovelock Native Cave, a horseshoe-shaped cave of about 35 ft width (11 m) and 150 ft length (46 m) where Northern Paiute natives anciently deposited a number of duck decoys and other artifacts.

According to the United States Census Bureau, the city has a total area of 0.9 square miles (2.3 km2), all it land. It has four differently designed welcome signs with pioneer and Wild West themes placed on its approach roads. At the southern end of town is the 20-acre reservation of the Lovelock Paiute Tribe.

There were 778 households out of which 33.5% had children under the age of 18 living with them, 47.8% were married couples living together, 9.3% had a female householder with no husband present, and 36.6% were non-families. 31.5% of all households were made up of individuals and 12.5% had someone living alone who was 65 years of age or older. The average household size was 2.52 and the average family size was 3.22.

The area in which the township of Lovelock was to be established first came to prominence as a lush way station on the Humboldt Trail to California. According to an 1849 description of what were then called the Big Meadows, "This marsh for three miles is certainly the liveliest place that one could witness in a lifetime. There is some two hundred and fifty wagons here all the time. Trains going out and others coming in and taking their places is the constant order of the day. Cattle and mules by the hundreds are surrounding us, in grass to their knees, all discoursing sweet music with the grinding of their jaws.” 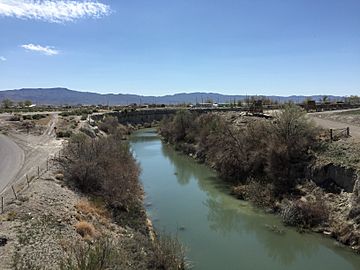 The Humboldt River near Lovelock

A few settlers stopped on there to harvest the wild rye growing in the meadows and scythe the hay each fall, which they then sold on. Arriving there from California in 1866, the English settler George Lovelock (1824–1907) bought the squatters' right for 320 acres (129 ha) and got with it the oldest water rights on the Humboldt River. Although born in Wales, Lovelock was from a family of Wiltshire origin that is known to family historians as the Lyneham Line. His brother Daniel moved to Australia—and one of Daniel's sons to New Zealand—so that the relations of the man after whom the Nevada town was named are now widely scattered.

The town's foundation came about with the building of the Southern Pacific Railroad through the area in August 1868. George Lovelock provided 85 acres (34 ha) for the site and the depot was therefore named 'Lovelock's' after him and appears as such on old maps. Thereafter he put his mining expertise to work and discovered many valuable lodes in the surrounding area, which contributed to enhanced railway traffic. He also acted as the town's first postmaster and invested in hotels. In particular he was the first proprietor of the Big Meadows Hotel on Main Street, adjacent to the train station and what was eventually the Greyhound Bus depot.

By 1900, the town of Lovelock had a school, churches and a business district along what was then called Railway Street—later renamed West Broadway. Also included among the businesses were no less than three weekly newspapers: The Lovelock Tribune, which ran from May 1898 until February 1912; the short-lived Lovelock Standard (April–September 1900); and The Argus (May 1900-Jan 1905). In August 1908 the weekly Lovelock Review was founded, becoming Lovelock Review-Miner in January 1911 and remaining under that name to the present day. 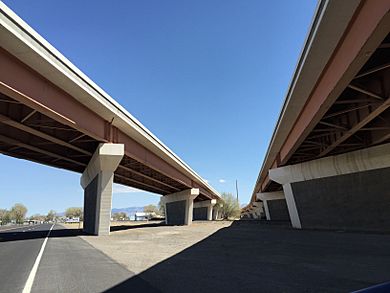 Lovelock was incorporated as a city in 1917 and in 1919 it was named the county seat when Pershing County was carved out of the southern part of Humboldt County. Its famous round Court House was built at the end of Main Street, on the site of a school, which was then located elsewhere. While mining and agriculture acted as the commercial centre for the locality, the community thrived on the state speciality of gambling, with many casinos. The town’s centenary was celebrated in 1968 with a Frontier Days theme suggested by two of the founder’s great-great granddaughters, Elaine Pommerening and Pat Rowe, who had only recently moved back to Lovelock. In 1983, old U.S. Route 40 through downtown was bypassed by Interstate 80, and in the early 1990s the rail depot closed, killing much of its prosperity. Since then it has promoted itself as a tourist attraction with its historic buildings and special events.

There have been several mining booms in the neighbouring mountains. These included intensive activity in the Rochester and Seven Troughs areas at the start of the 20th century and subsequent drilling with more advanced techniques later in Rochester. The Coeur Rochester mine began further open cast mining for silver and gold in 2011, test drilling for gold continues at Relief Canyon, and diatomite is dug at the Colado Mine. 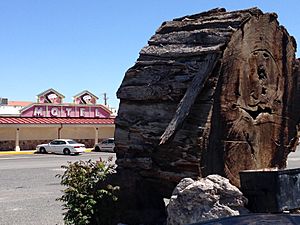 Among the tourist events figure the I.D.E.S. Portuguese festival in May and what became the annual Frontier Days weekend in July. There are also hot air balloon races (Lovers Aloft, inaugurated in February 2004) and the Lovelock Street Fever car show, begun in June 2007. A major draw is the Lovers Lock Plaza in the shaded area at the back of the Court House where couples symbolise their love by attaching a padlock to an 'endless chain', a practice begun on Valentine’s Day, 2005. The following year saw the construction of a dirt-racing track known as the Lovelock Speedway.

Lovelock's heritage buildings include the wooden built Grace Methodist Church on the corner of Cornell Avenue and 8th Street, dating from 1886. It was destroyed by fire in 1922 and the tower was rebuilt without the original spire; in 1983 the church was badly damaged by another fire and was restored again. Marzen House Museum is another Victorian building, built in 1874. The Italianate farmhouse was transported from Big Meadow Ranch in the 1980s and has on its site an assay office, farm machinery sheds, and buildings housing vintage automobiles, while inside it contains 1800s furnishings and a museum, shedding light on the area’s history. 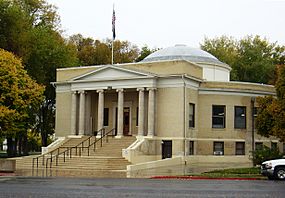 Among so much that has been otherwise torn down and not replaced in the town, the Longhorn Bar beside the tracks on West Broadway is one of the few remaining commercial buildings in typical Nevada style. Not far away is the railroad depot dating from 1880. In 1999 it was presented to the town by the Union Pacific Railroad to be restored and moved to another lot for use as an eatery. This was registered as a historic building in 2004.

Pride of place goes to the distinctive Pershing County Courthouse, dating from 1919. Julie Nicoletta describes the circimstances: 'Pershing County officials approached Frederic Joseph DeLongchamps, by then the architect of six Nevada courthouses, and asked for a design that would be low in price but distinctive in appearance. As a solution, DeLongchamps designed a round courthouse, patterning it after Thomas Jefferson's library at the University of Virginia campus. The circle-over-hexagon design includes a circular interior hallway and a round courtroom decorated with Corinthian pilasters. A broad, sweeping concrete staircase leads to the main floor of the Beaux-Arts classical structure. Its entrance includes a pedimented portico supported by six Ionic columns. Doric pilasters separate the main story windows. Cream-colored brick and terracotta finish the exterior. A shallow dome crowns the roof and provides the courtroom with a dramatic, soaring ceiling.'

Lovelock in song and story

There is something about the resonance of the town's name that has appealed to songwriters. It is referenced on the debut album of the folk-rock band Center Divide, Lovelock to Winnemucca (1998), a title drawn from the opening lines of the first song there, "Lovelock". The lyrics contemplate lost love as the car speeds down the bleak highway between the Nevada towns. 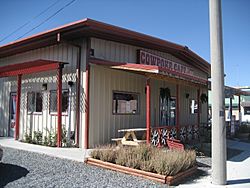 The Cowpoke Cafe in Lovelock

The wry “Limbo in Lovelock”, first performed in 2005 by the Hot Buttered Rum String Band, was eventually recorded on their Live in the Northeast CD (2007). Although at first a stopover in the town is made to sound like a doorway to hell, the mood changes at the end.

Well just outside nowhere, mile marker 105,
You'll find yourself in Lovelock where the game’s to stay alive;
Get yourself a burger down at the Cowpoke Café,
Where the gals have quite a smile, it's the special of the day.

Interviewed about the meaning of this verse, one of the band reminisced that they had stopped at the diner and noticed a sign on the counter 'explaining the special of the day. The girls working there were teenagers and full of smiles and good cheer. It was very welcome after a trying day on the road. I'd say the girls' smiles were the special of the day because they really cheered us up.'

“Lovelock” is also the second track on Pitch Black‘s second album, This is the Modern Sound (Revelation Records, 2005). Though the words are difficult to make out, a review informs us that this is a typically punk ‘us against the world anthem’. Other songs referencing mining towns and imagery explain why the name "Lovelock" was chosen.

A stopover in the town is the subject of Fred Leebron's prize-winning short story “Lovelock”, originally published in Ploughshares magazine in 1993. An ex-convict staying overnight at a Lovelock motel picks up a retarded woman and guiltily sees her and her sister off in their car the next morning. Leebron explains that the inspiration for the story 'comes from a brief encounter I had in New Orleans in 1985 and an overnight stay I made in Nevada four years later. I began writing a novel that contains "Lovelock" as a chapter in the spring of 1992.' The story was reprinted in the anthology Voices of the Exiled (Doubleday 1994); the novel into which it was incorporated, Out West, appeared in 1996.

Stephen Bly’s Wild West novel Dangerous Ride Across Humboldt Flats (Crossway Press, 2003) deals with the area before the town was built. In the opening chapters, an orphaned Pony Express rider comes across Trent Lovelock and his family on Humboldt Flats in 1860 and is befriended by them. Although George Lovelock had yet to set out for Nevada at that time, the author has acknowledged that he had the town's founder in mind in his fictitious Trent Lovelock.

Finally, Lovelock has a poet of its own in Adrian C. Louis, who was brought up on the small reservation for Lovelock Paiute Indians south of the town. The presence of the Indian Cemetery there is an abiding point of reference for him and a place to which he often returns, in person and more often, in memory.

I'm at that place I grew up to leave.
Alkali-crusted sand waves have drifted against my markers of blood.

Other poems in which the town's name figures are, like the lyric of "Limbo in Lovelock", the product of travellers cruising through. They include Shaun T Griffin's "Rain outside Lovelock, late March", published as a broadside by Black Rock Press (Reno, 2010), and two titles in the work of Kirk Robertson. "Lovelock to Twin Falls" dwells on abandoned shacks in the desert, while “Monday Night, Lovelock” meditates on the abandoned junk that 'people let pile up/around their houses’.

All content from Kiddle encyclopedia articles (including the article images and facts) can be freely used under Attribution-ShareAlike license, unless stated otherwise. Cite this article:
Lovelock, Nevada Facts for Kids. Kiddle Encyclopedia.