Gabbs is an unincorporated town in Nye County, Nevada, United States. The population was 269 at the 2010 census and it is the northernmost community of Greater Las Vegas.

Gabbs was founded circa December 1941 as a company town for Basic Magnesium, Inc. (BMI), which operated a magnesium production plant in the area. The town grew out of an earlier mining camp named Brucite (after the magnesium oxide brucite that occurred locally), and took the name of the surrounding Gabbs Valley, itself named after paleontologist William Gabb (who had studied fossil specimens from the area). World War II demand for magnesium fueled the plant's expansion under the direction of the War Production Board, and policing, a jail, and a school district were established during 1942. Gabbs became a township in June 1943, with a population of 426. Settlements at North Gabbs, South Gabbs, and Tent City (which later largely merged into North Gabbs) were served by a library, city hall, parks, and tennis courts, and a succession of local newspapers. The city incorporated on March 29, 1955. 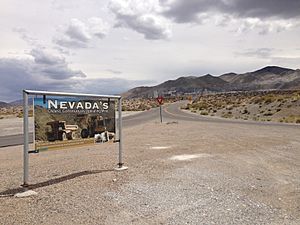 Mine entrance in Gabbs

In September 1944 the original magnesium plant was closed, having produced enough ore to meet targets for the projected duration of the war. The local population initially fell, but revived when a new plant administered by Basic Refractories, Inc., producing magnesium for the private sector, was opened in 1955. The town's population climbed to 796 by 1960.

In 1982 BRI laid off half its 350 workers, prompting the town's population to decline once more. An influx of workers to a gold mine in nearby Paradise Peak briefly expanded the population again during the 1980s and 1990s, but this plant too closed in 1994, and in 2001 Gabbs lost its incorporated status. Today the town retains a high school, stores, and homes.

According to the United States Census Bureau, the CDP has a total area of 2.2 square miles (5.8 km2), all land.

There were 121 households, out of which 23.1% had children under the age of 18 living with them, 51.2% were headed by married couples living together, 8.3% had a female householder with no husband present, and 35.5% were non-families. 32.2% of all households were made up of individuals, and 12.4% were someone living alone who was 65 years of age or older. The average household size was 2.22, and the average family size was 2.78.

All content from Kiddle encyclopedia articles (including the article images and facts) can be freely used under Attribution-ShareAlike license, unless stated otherwise. Cite this article:
Gabbs, Nevada Facts for Kids. Kiddle Encyclopedia.