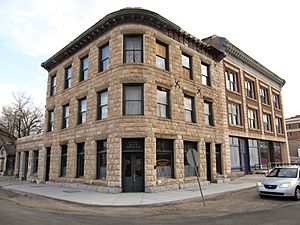 Esmeralda County is a county in the west of the U.S. state of Nevada. As of the Census American Community Survey 2019, the population was 969, making it the least populous county in Nevada. Esmeralda County does not have any incorporated communities. Its county seat is the town of Goldfield.

Its 2000 census population density of 0.2706 inhabitants per square mile (0.1045/km2) was the second-lowest of any county in the contiguous United States (above Loving County, Texas). Its school district does not have a high school, so students in grades 9–12 go to school in Tonopah, in the Nye County School District.

Most residents live in Goldfield or in the Fish Lake Valley, near the California border. Esmeralda is the only Nevada county in the Los Angeles TV market (or any California market) as defined by The Nielsen Corporation.

Esmeralda County is one of the original counties in Nevada, established in 1861. When it was organized, it comprised the part of the Nevada Territory south of the 39th parallel and east of Mason Valley. Esmeralda is the Spanish and Portuguese word for "emerald". An early California miner from San Jose Ca (descended from the Cory family of New Jersey), James Manning Cory, named the Esmeralda Mining District after the Gypsy dancer, Esmeralda, from Victor Hugo's novel, The Hunchback of Notre Dame.

Just after the organization of Esmeralda County, the vast majority of it wasn't discovered yet. John C. Frémont was one of the few people who had discovered parts of the county. He had crossed Big Smoky Valley in 1845. Also, Aurora and its northern corridor had been discovered. In 1862 and 1863, the area along the Reese River was discovered during the Reese River excitement. The event resulted in the establishment of three mining districts in the Toiyabe Range, namely Marysville, Twin River, and Washington, and the establishment of a number of settlements and ranches in Esmeralda County. Explorers kept going south and explored the Shoshone Mountains. The mining district Union was organized after silver was found in 1863 and the settlement of Ione was founded over there.

The total area of Esmeralda County more than halved as Nye County was organized on February 16, 1864. That county was entirely created out of land that used to be part of Esmeralda County. Esmeralda has had three county seats: Aurora until 1883, Hawthorne from 1883 to 1907 and finally Goldfield. At one point, due to the disputed border with California, Aurora was simultaneously the county seat of both Mono County, California and Esmeralda County, Nevada. Samuel Clemens (Mark Twain) wrote about his time as a miner in the Esmeralda District in his book Roughing It.

Esmeralda grew from a gold mining boom in the first years of the 20th century. The mines were largely tapped out by the end of the 1910s and the economy and population declined afterwards.

The county is dominated by the Silver Peak and Monte Cristo mountain ranges. Mountains in the county include: 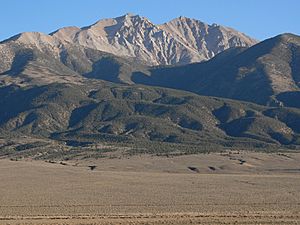 Boundary Peak, the highest point in both Esmeralda County and the state of Nevada, is in the Inyo National Forest 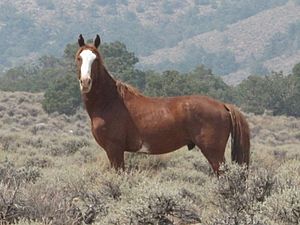 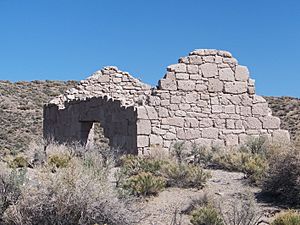 An abandoned building in Palmetto, an Esmeralda County ghost town

Each of these communities is a census-designated place:

All content from Kiddle encyclopedia articles (including the article images and facts) can be freely used under Attribution-ShareAlike license, unless stated otherwise. Cite this article:
Esmeralda County, Nevada Facts for Kids. Kiddle Encyclopedia.