Kids Encyclopedia Facts
For the "Mercury-Lincoln Mine" which was one of the "cities" where a Zone Commander was stationed for nuclear testing, see Operation Teapot.

Mercury is a closed village in Nye County, Nevada, United States, 5 miles (8.0 km) north of U.S. Route 95 at a point 65 miles (105 km) northwest of Las Vegas. It is situated within the Nevada National Security Site and was constructed by the Atomic Energy Commission to house and service the staff of the test site. The specific site was known as Jackass Flats and nearby Nevada Test Site 400. Today, the site is governed by the United States Department of Energy. As part of the test site, the village is not accessible to the general public. It was named after the mercury mines which flourished in its general vicinity a century before the village itself was established. The current population is unknown.

The town started in 1950 at the beginning of operations of the Nevada Test Site as Base Camp Mercury, a military-style encampment built to provide basic facilities for personnel involved. As the scope of the testing program expanded, so did the number of personnel required to fulfill the site's mission, and beginning in 1951 a 6.7 million dollar construction project was undertaken to provide adequate individual housing, office, and service structures with a civilian town-like design. With the acquisition of a full-service post office in the mid-1950s, Base Camp Mercury was formally renamed Mercury, Nevada.

In 1957, the US Navy launched nine atmospheric sounding rockets to measure nuclear radiation and other atmospheric data, using Mercury as a staging area. The Naval Radiological Defense Laboratory conducted its first test flight in 1956. This test rocket lifted 13.6 kilograms (30 lb) to an altitude of 40 kilometres (25 mi).

In the early 1960s the town population grew to over 10,000, and further construction work was undertaken to upgrade the permanence of the town. A school was established, and numerous recreational and shopping facilities were added, including a movie theater, bowling alley, recreation hall, swimming pool, and hobby center, as well as a full-care health clinic, library, lodging (the Atomic Motel being the most prominent example), a non-denominational chapel with a cadre of chaplains, a service station with a garage, and a bus station. In 1962, the Desert Rock Airport was added for the visit from President John F. Kennedy on December 8.

The town flourished until 1992, when all but subcritical nuclear testing ended at the Nevada Test Site, as a result of the United States honoring the Comprehensive Nuclear-Test-Ban Treaty (even though the U.S. had not yet signed or ratified the treaty). The population shrank rapidly thereafter, leaving most of the facilities abandoned. A skeleton crew of scientists and military remains in Mercury, conducting limited testing and research. Most of the amenities have closed, and the town is now a shell of its former self, although dining, bar facilities, and a gym remain. The current population is unknown, and fluctuates. The last known census recorded about 500 people. 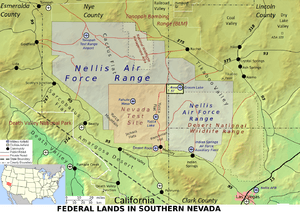 All content from Kiddle encyclopedia articles (including the article images and facts) can be freely used under Attribution-ShareAlike license, unless stated otherwise. Cite this article:
Mercury, Nevada Facts for Kids. Kiddle Encyclopedia.