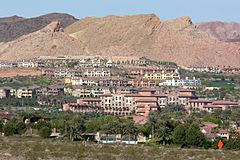 Lake Las Vegas in Henderson, Nevada, refers to a 320-acre (130 ha) reservoir and the 3,592-acre (1,454 ha) developed area around the reservoir. The area is sometimes referred to as the Lake Las Vegas Resort. It is being developed by 5 companies including Lake at Las Vegas Joint Venture LLC.

Actor J. Carlton Adair conceived Lake Las Vegas around 1967 for Lake Adair. At the time he purchased the land and water rights. In 1987, Ronald Boeddeker acquired 2,000 acres (810 ha) from the US Government when Adair went bankrupt.

Lake at Las Vegas Joint Venture, LLC filed for Chapter 11 bankruptcy on July 17, 2008. Debts were estimated at between $500 million and $1 billion.

Lake Las Vegas emerged from bankruptcy in July 2010 with a plan that took nearly two years to complete. All existing debt was wiped away and the development has $30 million in hand to complete several of the unfinished infrastructure projects. The Lake Las Vegas bankruptcy creditors, not Lake Las Vegas development themselves, have filed a lawsuit against the former insiders. (Bass Brothers, TransContinental, etc.) The creditors' theory is that the $500 million equity loan the former insiders took against the property caused the demise of Lake Las Vegas. The creditors are hoping to recoup money from the former insiders. In a related action, resort property owners are suing lender Credit Suisse as part of a multibillion-dollar lawsuit led by bankrupt Yellowstone Club founder Timothy Blixseth and his son Beau Blixseth who claim the Lake Las Vegas Joint Venture bankruptcy was caused by a "loan to own" scheme between the bank and resort developers.

The golf course was purchased by Nevada South Shore LLC, a Hawaii-based corporation for $4.5 million on February 17, 2011.

International boutique hotelier, Dolce Hotels, re-opened the former Ritz Carlton on February 11, 2011, as the Ravella at Lake Las Vegas. On April 30, 2013, Kam Sang Co. announced that the Ravella would be renamed the Hilton Lake Las Vegas, to gain popularity of the hotel. The Hilton opened June 6, 2013.

Lake Las Vegas is the subject of a lawsuit between investment fund Claymore Holdings and Credit Suisse, which was the agent for a syndicate of entities that loaned $540 million to develop the property. Claymore and others accused Credit Suisse of fraudulently inflating the value of the development in order to generate higher fees for itself. The core of the allegations centered on a new appraisal methodology conceived of by Credit Suisse executive David Miller, who in internal emails is referred to as Credit Suisse’s Dr. Frankenstein. The Swiss bank has repeatedly denied the allegations.

All content from Kiddle encyclopedia articles (including the article images and facts) can be freely used under Attribution-ShareAlike license, unless stated otherwise. Cite this article:
Lake Las Vegas Facts for Kids. Kiddle Encyclopedia.