Cedar City is a city in Iron County, Utah, United States, 250 miles (400 km) south of Salt Lake City, and 180 miles (290 km) north of Las Vegas on Interstate 15. It is the home of Southern Utah University, the Utah Shakespeare Festival, the Utah Summer Games, the Neil Simon Theatre Festival, and other events. As of the 2010 census, the city had a total population of 28,857. In 2011, the U.S. Census Bureau estimated Cedar City's population to be 29,213.

The presence of prehistoric people in the Cedar City area is revealed by rock art found in Parowan Gap to the north and Fremont sites dated to A.D. 1000 and 1300. Ancestors of the present-day southern Paiute Indians met the Dominguez–Escalante Expedition in this area in 1776. Fifty years later, in 1826, mountain man and fur trader Jedediah Smith traveled through the area exploring a route from Utah to California.

Cedar City was originally settled in late 1851 by Mormon pioneers originating from Parowan, Utah, who were sent to build an iron works. The site, known as "Fort Cedar" or "Cedar City," was equidistant from vast iron deposits 10 miles (16 km) west and coal resources 10 miles (16 km) up Cedar Canyon, but was named after the abundant local trees (which are actually Junipers instead of Cedar). Two companies of men led by Henry Lunt reached the fort site in a blizzard on November 11, 1851, making that date the official founding. In 1855, a new site, closer to the iron works and out of the flood plain of Coal Creek, was established at the suggestion of Brigham Young; present day Cedar City is located at this site. Cedar City was incorporated on February 18, 1868.

The city has shared in the rapid growth of much of Southwestern Utah since the late 1980s. 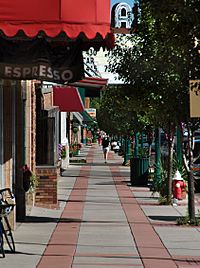 Cedar City is located in the southeast Great Basin, and is about 20 miles (32 km) north of the northeastern edge of the Mojave Desert. Its elevation of 5,840 feet (1,780 m) gives it a cooler and less arid climate vis-à-vis nearby Dixie, but it retains its cultural ties to St. George—the two cities, for example, share a daily newspaper.

According to the United States Census Bureau, the city has a total area of 20.1 square miles (52 km2), none of which is covered with water.

The city is located on the western edge of the Markagunt Plateau, in a high desert valley, Cedar Valley, with no ocean drainage. The climate is the typical cool semi-arid climate (BSk) of the Mountain West, though snowfall can be quite heavy, reaching a historical maximum of 36.9 inches (0.94 m) in January 1949. Interstate 15 connects the city with St. George (50 miles) and Las Vegas (180 miles) to the south, and to Interstate 70 (70 miles) and Salt Lake City (250 miles) to the north. State roads connect Cedar City with Panaca, Nevada near US 93, Kanab, Utah via US-89, and to US 50 and US 6 in Nevada. Similar to St. George, the city enjoys an excellent location on the west's regional transportation network. Los Angeles is 439 miles (707 km) south and San Diego is 500 miles (800 km) south on Interstate 15, Phoenix is 465 miles (748 km) south via Interstate 15 and US-93, and Denver is 580 miles (930 km) east via Interstates 15 and 70.

A branch line of the Union Pacific Railroad serves customers on the western outskits of the city. The branch connects to the railway's main line at Lund. 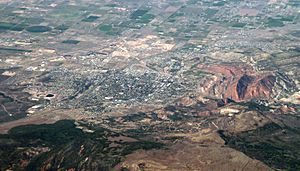 There were 6,486 households out of which 39.0% had children under the age of 18 living with them, 59.8% were married couples living together, 9.1% had a female householder with no husband present, and 27.8% were non-families. 16.3% of all households were made up of individuals and 5.8% had someone living alone who is 65 years of age or older. The average household size was 3.07 and the average family size was 3.37.

All content from Kiddle encyclopedia articles (including the article images and facts) can be freely used under Attribution-ShareAlike license, unless stated otherwise. Cite this article:
Cedar City, Utah Facts for Kids. Kiddle Encyclopedia.