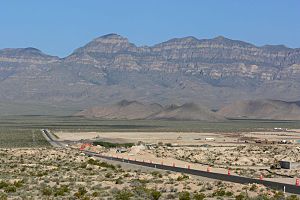 Coyote Springs, Nevada, is a master-planned community being developed in Lincoln County and Clark County, Nevada. The community was initially planned by developer and attorney-lobbyist Harvey Whittemore and Pardee Homes. Thomas Seeno and Albert Seeno, Jr. became the sole owners of Coyote Springs following Whittemore's resignation from the Wingfield Nevada Holding Group amidst legal troubles. No homes had been built as of 2013, and a Wingfield spokesperson predicted that construction remained years away.

A golf course designed by Jack Nicklaus has been constructed, but additional work was put on hold due to the economic recession in the United States and complex legal issues. The planned development has attracted controversy because of environmental concerns and allegations of political favoritism.

The community was planned to cover 43,000 acres (17,000 ha) or 65 square miles (170 km2). While mostly in Lincoln County, initial development was planned for the Clark County portion of the land. Coyote Springs is located between U.S. Route 93 on the west and the Meadow Valley Mountains to the east, a drive of less than an hour from the city of Las Vegas and the Las Vegas Strip. The Coyote Springs valley is bisected by several major washes including the Pahrangat Wash and the Kane Springs Wash. The only access to the community is via U.S. Route 93 and Route 168.

Plans for Coyote Springs were first announced in 1998. Construction on the first golf course, designed by professional golfer Jack Nicklaus, began in 2005; the course opened in 2008. Construction on the community itself was planned for around the same time, with the official ground breaking held on July 5, 2006. Regulatory issues involving water rights and environmental issues delayed construction. An economic recession in the US recession placed construction plans on hold. Progress has been stalled further by various legal battles, and there is skepticism as to whether homes will ever be built.

In 2009, BrightSource Energy had announced plans to build a 960 MW (1,290,000 hp) solar thermal power plant within the development. Generators provided electricity until 2012, when an electricity substation was opened.

All content from Kiddle encyclopedia articles (including the article images and facts) can be freely used under Attribution-ShareAlike license, unless stated otherwise. Cite this article:
Coyote Springs, Nevada Facts for Kids. Kiddle Encyclopedia.