Monroe is a city in Sevier County, Utah, United States. The population was 2,256 at the 2010 United States Census. The city is home to both Mystic Hot Springs and South Sevier High School.

Monroe is located in rural central Utah. According to the United States Census Bureau, the city has a total area of 3.5 square miles (9.2 km²), all of it land. Monroe is bordered by mountains on the east and south, and farmers' fields to the west and north.

Monroe is home to naturally occurring hot springs with travertine deposits, a result of the Monroe-Red Hill geothermal system found along the Sevier fault. On the east side of town, hot water surfaces at a temperature of 168°F and a rate of about 200 gallons per minute. A travertine mound has formed, known as the Monroe Mound. This deposit stretches one mile across, 200 yards wide, and a few hundred feet thick. There is another hot water source about a mile north of town called the Red Hill Hot Springs. It also surfaces at 168°F, but at a rate of about 100 gallons per minute. The Red Hill mound is about one-third of a mile across, and deep red in color.

There were 636 households out of which 37.3% had children under the age of 18 living with them, 69.5% were married couples living together, 8.2% had a female householder with no husband present, and 19.5% were non-families. 18.4% of all households were made up of individuals and 11.6% had someone living alone who was 65 years of age or older. The average household size was 2.90 and the average family size was 3.31.

A few early, exploratory settlers came to Monroe in late 1863. They were followed by the first permanent group of settlers, who arrived in Monroe during February 1864. Most, if not all, of the first Settlers were members of The Church of Jesus Christ of Latter-day Saints (LDS Church), who had immigrated to Utah. At first the town was called South Bend (due to the proximity to a bend in the Sevier River), but soon after its settlement it was renamed Alma, in honor of the Book of Mormon prophet. It is estimated that by the end of 1864 around 20 families were living in Alma. They spent the first year building small homes and dugouts, along with clearing space for fields and pastures.

In April 1865 the Black Hawk War broke out between local Native Americans and the Settlers of both the Sevier and Sanpete Counties. The war drastically ended the progress which was being made in creating farms and homes in and around Alma.

Alma had been settled in the middle of the Native American’s hunting grounds and as a result they started to go hungry. During the war Native Americans were constantly trying to steal the Settler’s stock for food, and they were successful during several raids.

An artist’s interpretation of what Fort Alma may have looked like.

Sometime during 1865 work began on a fort to provide protect for both the Setters and their stock. The fort was completed and contained several homes, a blacksmith shop, along with a corral and stockyard for the animals. This fort, named Fort Alma, provided protection for about two years, but things continued to get more dangerous and in April 1867 the Settlers of Alma were evacuated. Most of the evacuees made temporary homes in Sanpete County, until they could return home.

An attempt to resettle Alma was made during 1868, but the Settlers ran into Native Americans near Cedar Ridge (now Vermillion, Utah) and a battle ensued. They were unsuccessful in resettling Alma, and it was not until March 1871 that Settlers were finally able to return to Alma. The following year they applied for a Post Office under the city name of Monroe, in honor of U.S. President James Monroe. By the end of 1872 the telegraph had been extended through Monroe, which connected it with the rest of Utah. In 1889 Monroe was incorporated as a town and remained that way until 1921 when it was incorporated as a city.

In 1882, Thomas Cooper and his wife homesteaded the area on the east side of town where hot springs water emerged. They built a wood box to collect the water and offered it as a soaking pool. Later, around 1905, a building was erected. There was a dance floor, an indoor swimming pool, and many dressing rooms. Many people came from miles around by horse and buggy to enjoy soaking and dancing. In 1930 Farnsworth bought the hot springs. He was the leader of a band, and it became the house band. The slogan for the Monroe hot springs was, "the home of mirth and merriment". The hot springs enjoyed many years of prosperity until around 1950. It was revitalized in the 1970s. The name was changed to Mystic Hot Springs in 1995. Mike Ginsburg has been operating the facility since 1996. There are two hot springs soaking pools and 6 big bath tubs filled with the hot springs water. They host music concerts regularly and have a Music Festival around the July 24th holiday. 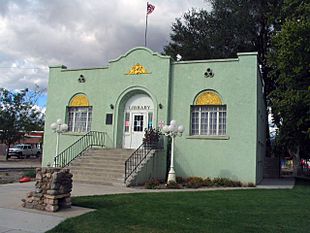 Monroe currently has a Texaco Gas Station, a Do-it Best Hardware, Bullies Drive-In, a dentist (Chisholm Dentistry), Monroe Canyon Assisted Living Center/Clinic, and a grocery store (Andy's Market). Monroe also has many new subdivisions and is nicknamed "The Little Green Valley" due to the many fields that surround the city.

All content from Kiddle encyclopedia articles (including the article images and facts) can be freely used under Attribution-ShareAlike license, unless stated otherwise. Cite this article:
Monroe, Utah Facts for Kids. Kiddle Encyclopedia.