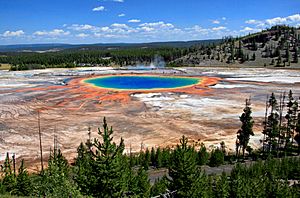 A hot spring is a spring produced by the emergence of geothermally heated groundwater from the Earth's crust. There are hot springs all over the crust of the earth. 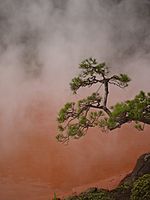 There is no universally accepted definition of a hot spring. For example, one can find the phrase hot spring defined as 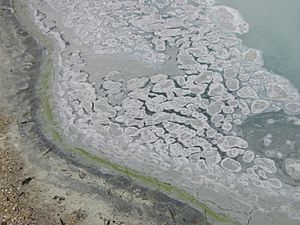 Water issuing from a hot spring is heated geothermally, that is, with heat produced from the Earth's mantle. In general, the temperature of rocks within the earth increases with depth. The rate of temperature increase with depth is known as the geothermal gradient. If water percolates deeply enough into the crust, it will be heated as it comes into contact with hot rocks. The water from hot springs in non-volcanic areas is heated in this manner. 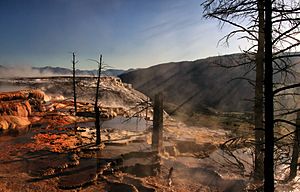 Note that hot springs in volcanic areas are often at or near the boiling point. People have been seriously scalded and even killed by accidentally or intentionally entering these springs.

Warm springs are sometimes the result of hot and cold springs mixing. They may occur within a volcanic area or outside of one. One example of a non-volcanic warm spring is Warm Springs, Georgia (frequented for its therapeutic effects by paraplegic U.S. President Franklin D. Roosevelt, who built the Little White House there).

All content from Kiddle encyclopedia articles (including the article images and facts) can be freely used under Attribution-ShareAlike license, unless stated otherwise. Cite this article:
Hot spring Facts for Kids. Kiddle Encyclopedia.