The Japanese Macaque (Macaca fuscata), also known as the Snow Monkey, is a terrestrial Old World monkey species native to northern Japan, although an introduced free-ranging population has been living near Laredo, Texas since 1972. 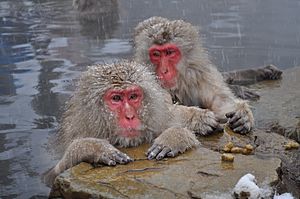 The Japanese Macaque spends most of its time in forests. It lives in a variety of forest-types. It feeds on seeds, roots, buds, fruit, invertebrates, berries, leaves, birds eggs, fungi, bark and cereals. It has a body length ranging from 79 to 95 cm, with a tail length of approximately 10 cm. Males weigh from 10 to 14 kg, females, around 5.5 kg. Individuals have brown-gray fur, a red face, hands and bottom, and a short tail.

Macaques mostly move on all fours. They are semi-terrestrial, with females spending more time in the trees and males spending more time on the ground. Macaques are known to leap. They are also great swimmers and have been reported to swim over half a kilometer. The longevity for the macaque averages 6.3 years (at least for females). However, they have been known to live much longer; males have lived up to 28 years and females up to 32 years. 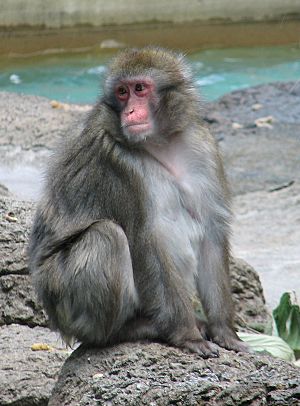 The Japanese macaque is the northernmost-living nonhuman primate. It is found on three of the four main Japanese islands: Honshu, Shikoku, and Kyushu. The northernmost populations live on the Shimokita Peninsula, the northernmost point of Honshu. Several of Japan’s smaller islands are also inhabited by macaques.

The southernmost population living on Yakushima Island is a subspecies of the mainland macaques. A study in 1989 estimated the total population of wild Japanese macaques to be 114,431 monkeys.

It survives winter temperatures below -15 °C (5° F), and is perhaps most famous for the amount of time it spends relaxing in naturally heated volcanic hot springs. 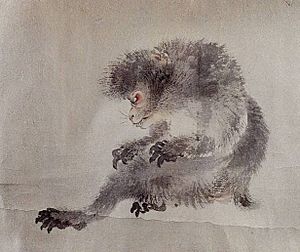 The Japanese Macaque is very smart. It is the only animal other than humans and raccoons that is known to wash its food before eating it. Also in recent studies, it has been found that the Japanese Macaque can develop different accents, like humans. It was found that macaques in areas separated by only a couple hundred miles can have very different pitches in their calls, their form of communication.

It is often the subject of Buddhist myths, and is thought to be the inspiration behind the saying "see no evil, hear no evil, speak no evil."

All content from Kiddle encyclopedia articles (including the article images and facts) can be freely used under Attribution-ShareAlike license, unless stated otherwise. Cite this article:
Japanese macaque Facts for Kids. Kiddle Encyclopedia.